Reading Homer: The Iliad in Translation 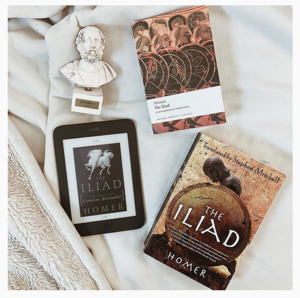 “Wrath—sing, goddess, of the ruinous wrath of Peleus’ son Achilles,
that inflicted woes without number upon the Achaeans,
hurled forth to Hades many strong souls of warriors
and rendered their bodies prey for the dogs,
for all birds, and the will of Zeus was accomplished;
sing from when they two first stood in conflict—
Atreus’ son, lord of men, and godlike Achilles.” (Iliad 1.1-7, trans. Caroline Alexander)

Though the Iliad is an epic poem that was composed and performed orally, its first sentence reads like an object lesson in writing an essay thesis. Caroline Alexander’s translation preserves the original’s first word—μηνιν (ménis) in Greek—which alerts the audience (listening or reading) that this will be a poem about a special kind of anger. Ménis refers to anger that is lasting and is associated with immortals. Next, the poet tells us to whom the wrath belongs: Achilles, who is the son of a mortal (Peleus). Achilles having divine-level anger alludes to his mother being a goddess (Thetis). Point being, we know we’re dealing with a hero who is especially close to the gods. The poet also tells us that an argument between Achilles and Agamemnon ("Atreus' son") resulted in Achilles’ wrath, which brought about much misery and many deaths. Perhaps most startling of all for modern readers, this was all apparently Zeus’ will.

In ancient Greek, declension determines grammatical function rather than word order. We can call this translation challenge number one. For English readers, it may seem strange to begin with the word “wrath” as Alexander does. By doing so, she not only preserves the first word of the original but also, and more importantly, immediately draws our attention to the poem’s central concern. “Wrath” does not quite capture “ménis,” but it does convey the severity of Achilles’ feeling. This is not just your garden-variety anger. It’s epic anger.

I use the word “epic” self-consciously here to refer both to the poetic label (epic poetry vs. lyric, epigram, etc.) and the larger concept. We might use “epic” to refer to something large in scope, yet the Iliad concerns just a few weeks in a war that lasted 10 years. So what’s “epic” about the poem? What’s the large scope? This brings us to the concept of the hero, what I’ll call translation challenge number two. We may tend, in the modern world, to think of heroism as rooted in personal sacrifice and strength of character—for example, running into a burning building to save those who are vulnerable, without concern for your own life. The ancient Greeks did not characterize heroes in such moral terms but in terms of skills and abilities. Per Hesiod’s Works and Days, heroes were a different, earlier breed of man, one with divine ancestry. The heroes of Homeric epic were neither immortal nor merely human but something in between. Their strength is described in the Iliad as literally superhuman: Nestor, for example, can easily lift a cup that two “contemporary” men would struggle to carry.

This excessive vitality, as Gregory Nagy characterizes it, could lead them to outrages, mistakes, and ruin. Their very strengths transmuted into flaws. Hence anger that might flare up in an instant and extinguish just as quickly becomes something more destructive in the exaggerated heroic state. Homeric heroes might have inspired admiration, awe, and even worship because of their extraordinary battle and public speaking skills, but not necessarily because of exemplary character. This is not to say that a code of conduct was absent or that heroes were not criticized for their excesses. The gods hold Achilles to account. But hero worship was a kind of power worship: Heroes had powers that ordinary mortals could only dream of and perhaps wish for. But excessive power also creates excessive problems, as we see explored not only in ancient Greek poetry but also in tragedy, philosophy, and history. When we complain that Homer’s heroes at times behave very badly indeed, well, that is the point exactly. Their stories are not meant only to entertain; they also offer cautionary tales.

Many of these paradoxical meanings and tensions are encoded in the poem’s original language, which I’ll call translation challenge number three: transliteration vs. translation. In English translations, proper names are typically transliterated, with the result that some of the meaning and impact of those names are lost.

One proper name that’s evoked often in the Iliad and whose meaning is lost in transliteration is Herakles. The name means fame (κλέος/kleos) of Hera, which can seem quite puzzling if you know the extent to which Hera conspired to rob Herakles of fame. And yet. The trials Herakles underwent because of Hera’s interference—namely his 12 labors—led to Herakles’ fame. By causing Herakles to suffer, Hera created the conditions for him to become famous.

For ancient audiences who knew this, the name Herakles might invoke the way suffering and fame are tangled together in the ancient Greek psyche. And the meaning of Achilles’ name might amplify this. Achilles, which most English translations use, is the Latinization of Akhilleas. Akhos means grief and publicly expressed grief. Achilles' grief at the loss of his beloved companion provokes him to overcome his pride and return to battle, which leads to his fame.

And since we’re on the topic, what did the ancient Greeks mean by “fame”? The ancient Greek word, kleos, can be translated into a single word in a number of ways: fame, glory, report, rumor. That’s quite a range, is it not? Many English translators opt for “glory,” as Anthony Verity does in this excerpt from book 12 (lines 322-328):

“My dear friend, if we two could escape from this war and were certain to live for ever, ageless and immortal, I would not myself fight in the first ranks, nor would I send you into the battle where men win glory; but now, since, come what may, death’s spectres stand over us in their thousands, which no mortal can flee from or escape, let us go forward, and give the glory to another man, or he to us.”

These are the words of Sarpedon, leader of the Thracians, who are aligned with Troy, to his comrade Glaucus. I can understand why translators choose “glory,” though it can imply that the poem approves of or endorses rather than describes events. Sarpedon is telling Glaucus that since they cannot escape death, no matter what they do, they might as well confront it head on. Such brash disregard for impermanence will lead, paradoxically, to their becoming embedded in epic song (called the Iliad) and thus immortalized. Sarpedon is not quite wrong, given that we continue to read and listen to this poem 2,700 years on. Another, fuller description of kleos is “name on one’s lips” or “that which is sung about.”

Is it “good” or “bad” that committing brash, violent, or in some way extreme acts will put your name on people’s lips? Could it be not a value judgment but a fact from observation? What would it mean to our systems of relations if our first impulse was to describe rather than to set ourselves apart through moral condemnation? What might we hope to achieve through observation? through condemnation?

All this is to say, reading ancient texts in translation can be confusing, rewarding, and challenging of our most fundamental assumptions. What we experience is mediated by time, culture, and language—each a powerful element in itself, let alone all together. The Iliad is a poem that rewards close reading, whether in its original or in translation. One consequence of close reading is that we realize how simultaneously far away from and intimately close to the poet's world we are. It’s too easy to zoom in on what feels relatable and read our own values, beliefs, and taboos into this poem whose plot is the Trojan war but whose idea is about so much more, some familiar and more strange.