What I read in June and July 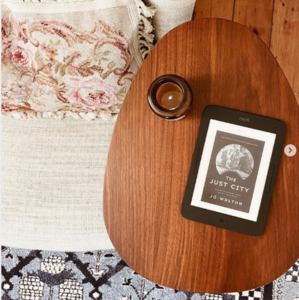 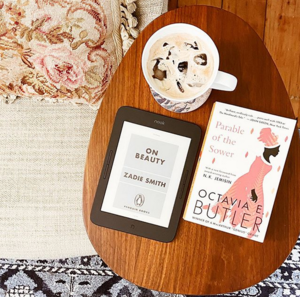 It has been a while since we have done this, for a number of reasons. One is simply that I’m doing less recreational reading overall. Another is that I've felt less connected to the books I’ve been reading and, as a result, less interested in talking about them. Is it the books or my mood or this difficult year? Yes. I've abandoned more books that I've finished over the last three months, but let's not speak about those...

What I read in June

I started June with this philosophical novel because I needed a book that would be calm, measured, and analytical. Walton delivered, with one reservation that I will return to in a moment. First, the concept of this novel: Athena and Apollo undertake an experiment to create Plato’s Republic. They gather a group of the best minds across history, deposit them in Bronze-Age Santorini, and have them educate a group of children according to Plato’s ideals. Athena and Apollo are both certain that the experiment will fail to yield Plato’s desired result of a Just society. What interests the two immortals is how the experiment will fail.

This novel helped me breathe and recover my sense of equilibrium at a time when I struggled to focus. It’s thoughtful and measured while directly confronting some of the most distressing human experiences. In this sense, the book very much feels like it replicates one of the truest things the ancient Greeks ever expressed and the thing that is most ignored today, which is that rage will rob you of your critical faculties and feed a vicious cycle of destruction that will consume you whole. My only issue with Walton’s book is a brief passage that perpetuates a false stereotype:

“Without the fall of Constantinople bringing manuscripts to Italy, there might have been no Renaissance. Constantinople hadn’t done much for civilization throughout the Middle Ages. It had held on, that’s all. It hadn’t built anything new, produced any new and truly wonderful books or art or scientific discoveries. The flowering of the Renaissance, on the other hand...”

It was very jarring to encounter these words in an otherwise smart and thought-provoking novel. I’m not going to address the appalling logic of this passage since I don’t believe readers are meant to agree with it, necessarily. What concerns me is the blatant misinformation about medieval Constantinople, modern-day Istanbul that goes unquestioned and perpetuates a Western fantasy about the Eastern Roman Empire (aka Byzantium, which was based in what was then Constantinople). There is much more to say about the political, religious, and social motivations behind this false narrative (i.e. that the Eastern Roman Empire never produced anything “truly wonderful”) than can fit or is necessary here.

Instead, I will point out that Constantinople was sacked twice, in 1204 by Christian Western crusaders and in 1453 by Muslim Ottomans. Both conquered (the crusaders only temporarily) and plundered the city, appropriating what they valued. See the horses of Saint Mark’s Cathedral in Venice and the Hagia Sophia in Istanbul as exhibits A and B. What they didn’t want, they destroyed, including priceless works of ancient and medieval literary and visual art. Scholars of Constantinople, many of whom did indeed flee to the West after the city's fall, where the Renaissance was already underway, and brought their work with them. Constantinople scholars had preserved and contributed invaluable knowledge about antiquity that continues to be studied today. See the Suda as exhibit C. To suggest that this culture was expendable because it never produced anything extraordinary...as a descendant of this conquered civilization who has not forgotten its achievements, that was uncomfortable to read. This aside, The Just City is an excellent read that I highly recommend.

On Beauty by Zadie Smith

This was another favorite read of June. The novel revolves around a family of five living in New England: British-born Rembrant scholar and university professor Howard, his Black American wife Kiki, and their three children. What I value most about Smith as a novelist is the compassion she has for her characters, even when they are making dreadful mistakes. She never oversimplifies or insults the reader’s intelligence by overwriting. This is all show, little tell, as is the point of a great novel. Everyone is real and flawed and has the capacity for growth, if they choose it.

The Libation Bearers and Eumenides (Oresteia #2 & #3) by Aeschylus, translated by Sarah Rudin

The second and third plays in Aeschylus’ trilogy (see more here) pick up where the story ended in Agamemnon, the first play. Surviving fragments of other trilogies suggest that Aeschylus’ chronological approach may have been rare, but who can say for sure? One thing that is for sure? These plays that ask what justice is continue to resonate in our times.

This is a young adult fantasy novel about a group of women whose job is to usher souls into the afterlife. The catch is that in order to achieve this job, they have to murder their true love. As implied by the premise, this felt like it sensationalized, except without enough substance upon which young readers could meditate, and that made me a bit uncomfortable, to be honest. Since the series is in progress, I want to reserve judgment until I see more.

Parable of the Sower (Earthseed #1) by Octavia E. Butler

Set in a dystopic future America, Butler’s novel asks what it means to be free and examines what kind of freedom is possible and desirable vs. not. That’s what I found most compelling about this novel, along with the spare but elegant prose style.

What I read in July

On a seemingly ordinary day, Jasper Dessen leaves his wife and son for what he thinks will be a short visit to a friend’s party. Except Jason is abducted at gunpoint, ordered to drive to an abandoned warehouse, injected with drugs, and thrust into a metal box. After that, things get really weird. This is multi-verse science fiction at its most humane. I loved how this book explored the concept of identity and the way a myriad of tiny moments accumulate to shape it. We may want to quantify it with labels and categories, but the infinite variability of human experience defies these tidy ambitions.

My intense enjoyment of this book suggests that I don’t read nearly enough science-based science fiction. I began this on a Tuesday evening and read straight through, with a short break to sleep. Maybe it’s that I have not studied much science...I can’t promise someone knowledgeable in physics will find this as engrossing as I did. If you’re looking for a meditation on what it means to be human, you could do a lot worse than this book.

For the first, oh, 300 or so pages of this 800 page tome, I was not especially impressed with it, but it got me in the end. Is the writing over-the-top and sometimes nonsensical? You best believe it is, but I couldn’t resist the message about friendship in this novel. I suppose I should give you some more information? Okay: It’s an adult fantasy novel set in a Roman Empire-ish city, but with modern-day technology and magical beings from a vast array of mythologies. There are friendship and romance, intrigue and danger, mystery and plot twists. I enjoyed it.

10 Minutes 38 Seconds in This Strange World by Elif Shafak

Shafak’s novel tells the story of Leila, beginning with her death; the title refers to the period of time that it takes brain activity to stop after one dies. It opens with Leila having been left for dead, though readers do not know why this has happened to her. Each chapter revolves around one of Leila’s final 10 memories, through which the story of her life unfolds. The final section of the book follows her friends, each of whom, like Leila, lives on the fringes of Istanbul society, as they learn what happened to her and investigate why. It’s a heart-breaking and beautifully written novel.

The Castle of Otranto by Horace Walpole

The original gothic novel can rival even Sarah J. Maas for over-the-top, melodramatic writing. Ha...but seriously, this novel made me laugh in all the wrong places. The writing is lovely, but it’s a curiously empty feeling reading it. It’s fine for generating a Features of the Gothic Novel list and taking the temperature of the time it was written (1764, for the record). I find it fascinating that Walpole set the story in the medieval Italy. But overall, I couldn’t see the point of this other than to tell a sensational story. It’s entertaining but easily forgotten...except it hasn't been. *insert shrug emoji*