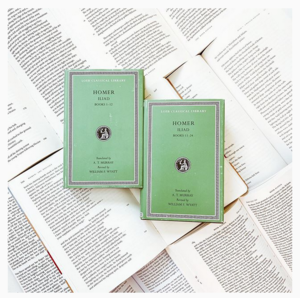 I am fond of stock-taking, reflection, perseverating on the past. Whatever you want to call it. The beginning, middle, and end of the year are the customary times to engage in such activities. Though some also like quarterly or bi monthly reviews. Basically, if you can make it symmetrical, you can make it a review period.

Anyway, I've spent some time over the last week thinking about the books that have been at my side during this wild ride called 2020. A book tag called, appropriately, the mid-year book freak out tag, created by booktubers Chami and Ely, has shaped my thinking. Read on for the great adventure...

Fifteen Dogs by Andre Alexis: Bored immortals Hermes and Apollo grant dogs human consciousness to see if it makes them as unhappy as humans. I read this one in January and have not been able to stop thinking and talking about it.

The Iliad by Homer, translated by E. V. Rieu: Is this cheating? It was a new-to-me translation that read like a novel. I recommend it for first-time readers who prefer a prose translation.

The Just City (Thessaly #1) by Jo Walton: Despite a glaring issue with this novel (see brief but important discussion here), I enjoyed the concept and execution of this novel immensely. Like Alexis’ novel, it revolves around a thought experiment. Athena and Apollo decide to create Plato’s Republic to see how it will fail. If you like philosophical novels and ancient Greek philosophy, you may enjoy this as much as I did.

On Beauty by Zadie Smith: Smith is one of the novelists I reach for when the world seems too ugly to bear. The narrative follows a British-born professor at a Massachusetts college, his Black American wife, and their three teens. If you need to feel hopeful amidst life's messes and complications, you might find this novel as comforting as I did.

The King Must Die (Theseus #1) by Mary Renault: Another thought experiment based on ancient Greece? Yes, please. Renault reimagines the Theseus myth as an historical story set in Bronze Age Santorini and Naxos. The imaginative scope is impressive, and the writing is brilliant. I’ve yet to read a novelist who has made me feel, viscerally, the awe, terror, and unknowability of the ancient world. If you want to feel like you entered a time machine, this is an excellent book to read.

Eumenides (Oresteia #3) by Aeschylus, translated by Sarah Rudin: I’m cheating again, but I’m not fussed about it. I’ve only read two other sequels this year, and neither of them had the impact of Eumenides. I recommend reading the whole trilogy, naturally.

New release(s) you haven't read yet but want to

The City We Became by N. K. Jemisin: A fantasy set in New York City, in which each borough becomes personified. I am intrigued!

The Empire of Gold (Daevabad #3) by S. A. Chakraborty: This was one of my favorite series from last year. I can’t wait to see where Chakraborty takes it next.

Most anticipated release(s) for second half of 2020

My most anticipated are all sequels to series that have engaged and intrigued me, including

The Tower of Nero (Trials of Apollo #5) by Rick Riordan

The Memory of Babel (Mirror Visitor #3) by Christelle Dabos, translated by Hildegarde Serle

Hollowpox: The Hunt for Morrigan Crow (Nevermoor #3) by Jessica Townsend

Neal Shusterman's Arc of Scythe series had me so impressed...and then The Toll happened.

The King Must Die (Theseus #1) by Mary Renault: I had grudgingly accepted that novels set in ancient Greece would never satisfy me. Then Renault came along to prove me wrong. I've never been so pleased to be wrong.

Prince from Fifteen Dogs and Kiki from On Beauty

Book(s) that made you cry

On Beauty and Fifteen Dogs

Books(s) that made you happy

This is an interesting question to think about. What makes a book “happy” in my view? I’d say books that make me think, that inspire me to reflect, that move me with their beauty. In this sense, the books that made me happy are many and varied, and how great is that?

Dark Matter by Blake Crouch was a marvelous journey that I gobbled up in approximately 14 hours, sleep inclusive. Also The Just City, The King Must Die, Fifteen Dogs, and On Beauty, for the aforementioned reasons.

Most beautiful book you've purchased or been gifted this year

For this I will call say my Loeb Classical Library editions (pictured). I adore them both for the cover aesthetic and (even more) for the treasures between the covers.

There is no need. Only want.

Tell me about your 2020 in books? Or your day. Whatever you feel like talking about...