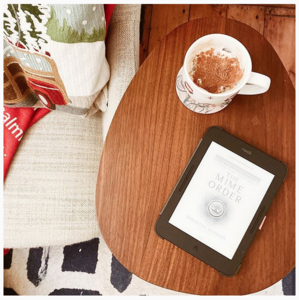 All year long, I have begun these monthly reviews exclaiming my shock and confusion at how quickly 2019 seemed to be passing. And now we've arrived at the last of the bunch with me feeling nothing original whatsoever: I’m a bit shaken that another year has come and gone. One very positive note that I can honestly end on: 2019 brought me wonderful new experiences, in books and life, December included.

This is a bit gaudy by my usual standards, but as you will inevitably concluded from the following stat, many of the books I read were quite short.

Because I use Goodreads to calculate this number, it is not entirely accurate, for a few reasons. First, it does not factor in books that I start but do not finish in a given month. Second, it does not factor in journal articles or chapters of books that I read, since I generally only enter into Goodreads books that I read in full. Finally, Goodreads calculates based on total number of pages in a published book. This may seem like a duh point, but this probably pads one’s overall numbers since I’m not necessarily reading all the pages of notes, acknowledgements, etc. that fill out the end of some books.

That aside, my monthly total in December averages to about 258 pages per book, but this is where we remember how averages can sometimes be misleading. I read four extremely short books, three poetry and one short story, each of which was under 60 pages. A fifth book was just over 100 pages (A Christmas Carol, coming in at 104). Three of the books I read were over 400 pages, and six were between three and four hundred pages. Noteably, none of the books I read were at the 250-ish page mark.

The number of hardcovers I read this month puts into perspective why my book budget is so depleted. Yikes.

I decided to break this down even further this month, grouping the books I read for readathons together since their prompts drove, to some extent, the book choices I made.

Tis-the-season-athon, a readathon hosted by a group of booktubers, took place during the first week of December and was the perfect way to kick off the Christmas season.

This was the first book I read for Tis-the-season-athon, and it was also the readathon's group read. I would never have picked this up myself and ended up enjoying it heartily. This adorable YA romance revolves around Sophie, who goes through an unexpected break up right before Christmas. To cheer her up/distract her, various family members set her up on the eponymous 10 blind dates. It’s a fluffy, feel-good novel that made me smile. My favorite thing about it was her large, boisterous, mostly supportive family.

Mr. Dickens and his Carol by Samantha Silva

Silva’s historical novel provides a mostly fictional account of what may have inspired Dickens to write A Christmas Carol. It had its touching moments, especially towards the end, which included a surprising little twist.

One Day in December by Josie Silver

At the beginning of One day in December, Laurie who is on a bus and Jack who is sitting at the bus stop make eye contact. The bus pulls away before Jack can hop on, and they fail to connect beyond that one moment. A few months later, he turns up at Laurie's door, as her roommate and best friend’s boyfriend. The plot turns from there, following Laurie and Jack across 10 years of life experiences. While reading it, I felt engaged and entertained. Still, a part of me resists the novel’s central premise.

I cannot express how much I loved this brilliantly conceived readathon. If you’re interested, I documented my experiences further here.

The Christmas Truce and Frost Fair by Carol Ann Duffy

Duffy has composed 10 Christmas poems, published each year in illustrated small-book format. The Christmas Truce and Frost Fair are two of those 10. Eventually, I’d like to collect them all. The Christmas Truce recounts the truce between German and English troops during World War I. Frost Fair takes place on a cold day in London circa 1683 and was inspired by winter fairs held along the Thames during the exceedingly cold winters of the Little Ice Age. I enjoyed both poems, though The Christmas Truce hit me hardest telling, as it does, a heartbreaking true story.

A Christmas Carol by Charles Dickens

What can I say about this novel that I haven’t already? I read it twice during the readathon, first on my Nook then in paperback. It’s astonishing to me that Dickens’ description of the Cratchits can still make me cry after 20-odd readings.

Christmas Past (Chronicles of St. Mary’s #8.6) by Jodi Taylor

In November, I read the first book in Taylor’s Chronicles of St. Mary series. As is evident by the “8.6,” this short story occurs much later in the series, but I couldn’t resist—say it with me now—the $1.99 Nook book sale price. Though reading it inevitably spoiled me for plot twists to come, it hasn’t hindered me from wanting to continue the series. Quite the opposite. I’m actually more intrigued now than I was at the end of the first book.

This year, I've explored my passion for reception literature, and not just ancient myth reception. Reading books inspired by and/or in conversation with previous books reminds us of the communal nature of knowledge and meaning. It shows us how books and reading mediate our experiences. Bah! Humbug! does this cleverly for young readers, introducing them to Dickens’ text while demonstrating its relevance to contemporary readers. Young Harry has been cast in his school’s production of Scrooge, but his father is too preoccupied with work to stay through the performance. Dickens’s own lines serve as the play’s script, which is printed alongside Harry’s father’s journey to recover what matters most.

The Return of Ulysses: A Cultural History of Homer’s Odyssey by Edith Hall

This is a fascinating compilation and discussion of artistic works—literary, musical, visual—across the centuries that were inspired by The Odyssey.

The Gods of Olympus: A History by Barbara Graziosi

Here is another utterly fabulous work of scholarship/history by Graziosi. Find everything that she has written and read it all, is my general advice. This one is written for a general audience, and I cannot recommend it strongly enough for anyone who wants to understand 1) what the gods and goddesses of Hellenic myths may have meant to the audiences who heard poems about them and 2) how those meanings evolved across history. Graziosi begins in archaic Hellas, then follows the gods and goddesses through classical Athens, Hellenistic Egypt, the Roman Empire, the middle ages, and the Renaissance.

The Guinevere Deception by Kiersten White

As I’ve mentioned before, I’ve been very pleased with my Book of the Month YA picks. It’s the first subscription box that has been entirely satisfying, probably because we’re given several options each month. The Guinevere Deception, a retelling of Arthurian legends, was my November selection. In White’s YA fantasy, Guinevere isn’t what she seems, and she doesn't know as much as she need to know. The pacing was a bit uneven; it started out quite slow but picked up considerably in the second half. Some readers might find aspects of Guinevere’s character frustrating, but I enjoyed this enough that I’m looking forward to continuing the series.

Another Night Before Christmas by Carol Ann Duffy

As you may have divined from the title, this is another of Duffy’s Christmas poems, and it’s another work of reception. Duffy reimagines the night before Christmas poem through the eyes of a contemporary young girl (her daughter, I believe?).

I loved this YA romance a whole heck of a lot. It features a mythical frame narrative borrowed from a myth recounted in The Odyssey. Hephaestus traps his wife Aphrodite in flagrante delicto with her lover Ares and, in Lovely War, puts the duo on trial. As her defense, Aphrodite explains the relationship between love (which she is the goddess of) and war (which Ares is the god of) via two intertwining love stories set during World War I.

This novel is a great example of effectively using ancient myths to explore human nature and experience. Berry draws on the myth in insightful and interesting ways. In addition, the WWI love stories provide an opportunity to explore true history that has often been overlooked, especially regarding what happened in Belgium and to African-American soldiers during the war.

The Afterlife of Holly Chase by Cynthia Hand

Oh hey, look, it’s another work of reception. Also, it’s another A Christmas Carol revisit. I first experienced it during the 2018 Christmas season via audiobook. I enjoyed it so much that I picked up the paperback. Upon rereading it this year, I loved it just as much if not more.

Our main character is a gender-swapped Scrooge, the titular Holly Chase, who is visited by three ghosts on Christmas Eve. Only Holly is not moved to change and dies in a freak accident shortly after (this is not a spoiler: see the title). Holly is consigned to Project Scrooge. The company selects a Scrooge figure each year and tries to turn her/his life around via a deceased mentor and three ghosts. Holly is required to perform the role of Ghost of Christmas Past. Hand’s application of Dickens’s narrative is smart, creative, and thoughtful, with plenty of its own twists. I enjoyed the self-referential nature of this retelling, which provides an opportunity to reflect, on the page, on the ways Dickens’s story applies in the modern world. And Hand’s ending was every bit as touching as Dickens’s.

At the end of book two, my feelings about this series are similar to how I felt after reading the first book: The writing can veer toward melodramatic, but it’s also immersive in a pleasing way. Shannon throws you into the deep end of this world, a futuristic London run by a totalitarian government that has criminalized clairvoyancy. What continues to impress me with this series is the imaginative scope. The world feels fully realized; while it has familiar elements, it feels like it's own, relatively unique thing. I wasn’t planning to go straight into the third book, but The Mime-Order ended on such a colossal cliff-hanger that I couldn’t wait.

How was your December in books?