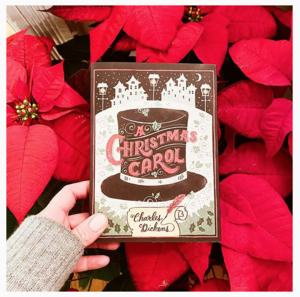 If you have been around for a while, you know that Charles Dickens' A Christmas Carol is my favorite book to read this time of year. I reread it every Christmas, and I still get weepy reading about the Cratchits...every single time. So of course I could not resist doing this A Christmas Carol-inspired tag, created by Lauren Wade.

The first book that I remember reading, having read to me, and loving is Aesop’s Fables, a collection of brief stories dating to the Archaic period of ancient Hellas and attributed to Aesop (who probably didn’t exist, but let’s not get into that here). The stories feature anthropomorphized animals learning often painful lessons about human nature and experience. Having experienced the fables at an age when the world felt very new and confusing, I loved how they inspired me to think and reflect on actions and consequences. Their gentle, observational insights and guidance still inspire me.

Another favorite that I reread ad infinitum was Frances Hodgson Burnett’s A Little Princess. I had three editions, and all were falling apart by the time I entered high school. My love for this book is so intense that it can be difficult to express in a satisfying way why it resonated so powerfully with young me. I know that it was a complicated cocktail of sympathetic identification with the main character, the drama of the riches-to-rags-to-riches narrative arc, and, as with Aesop’s Fables, a feeling that this character could teach me something important about how to live well and properly. I should probably reread it again...

This month, I devoured the YA romance Lovely War by Julie Berry. I might have missed this altogether were it not for one of my auto-watch booktubers explaining that the novel features a Hellenic mythology frame narrative. Said frame narrative revolves around a myth told in The Odyssey, in which Hephaestus, god of smithing and such, sets a trap for his cheating wife Aphrodite, goddess of love, and her lover Ares, god of war. Hephaestus puts the lovers on trial, and Aphrodite’s defense involves two intertwining love stories set during World War I. Berry’s nuanced, thoughtful application of the myth throughout the narrative had me placing my hand over my heart and sighing with delight. Several times, I had to stop reading so that I could hug the book (and dab at my leaky eyeballs). And her ending! Her ending was creative perfection.

In addition to what she does with myth, Berry clearly researched the World War I period extensively and sheds light on important stories of that time that do not get enough attention. I do believe this novel will stay with me.

My most anticipated reads of 2020 are sequels (as discussed last week). The two I’m most eager for are Empire of Gold by S. A. Chakraborty and the fifth book in Rick Riordan’s Trials of Apollo series (as yet unnamed, to my knowledge). Not at all coincidentally, both are the final books in their respective series.

Bah, Humbug! - A book that everyone else loves that you just can't stand

I cannot bear Madeline Miller’s Circe, as much for the book itself as for the way that I heard Miller speak about it at one of her book appearances. The novel lifts out of their historical contexts a variety of ancient myths, spread across hundreds of years, and cobbles them together to create a sort of biography of Circe, the sorceress who first appears in Homer’s Odyssey.

The novel's structure is a bit pedestrian, proceeding from Circe's birth and marching chronologically through her life, which resulted in a somewhat boring first half but a considerably stronger second half. Circe is presented primarily as a victim whose worst flaw is that she is too nice, which makes her gullible, which makes her prey to all the baddies around her. If she does bad things, it’s only because bad things have been done to her. Where Homer’s Circe is an ocean, mysterious and seductive and dangerous, Miller’s is a kiddie pool, transparent and shallow and benign. As for the aforementioned strong second half, I would have thoroughly enjoyed it, had Miller set it in the modern world. The ancient setting is jarring because Miller is not telling an ancient story, despite the appropriation of ancient characters and plots. She is telling a story about ourselves and our world.

Of course, fiction writers can do whatever they want. I found Circe frustratingly anachronistic, but I recognize that my response to the novel reflects both my personal preferences and my cultural context. I am a Hellene who not only grew up with the myths (lots of readers who are not Hellenes can say the same) but also with an understanding that Graeco-Roman is not the same as Hellenic. This, ultimately, is why hearing Miller speak about the book was so frustrating.

She has studied antiquity, so perhaps I can be forgiven for expecting her to be aware that variations on the myths occur within the ancient world alongside socio-political shifts. Homer’s Hellas is not Virgil and Ovid's Augustan Rome. Consequently, they do not always have the same concerns and priorities and do not tell the same kinds of stories. Perhaps Miller is aware of this, but it was not evident in her talk. She conflated Homer and “Greek” mythology, at times not seeming to realize that she was talking about Roman retellings. The most startling instance was when she complained that Circe is described as “savage” in antiquity. This occurs not in Homer but hundreds of years later in Virgil, whom Miller professed to prefer. I cannot express how trying it was to listen to her yuck it up about those dopey Greeks to her adoring audience. I had a raging headache after the talk.

It’s fine not to like Homer. I will question your taste and your priorities, but these kinds of debates only show how relevant ancient texts continue to be, and that includes those that I do not personally favor. I do ask that you at least show respect for the texts that you plunder for plot and character. By respect, I do not mean uncritical reverence. I mean recognize that ancient texts—and this applies to me reading Virgil as well—are fundamentally other, products of a specific point in time, a specific culture with its own pressures and needs that we, living 2,000 years plus later, can never fully understand.

Bob Cratchit - An old dependable that you always recommend

I find it impossible to make blanket recommendations. Even The Odyssey has one-star reviews on Goodreads, so no story can please everyone...even one of the best ever composed (the other is The Iliad, by the way). That said:

If you want to know what all the fuss is about re: The Odyssey, I recommend E. V. Rieu’s prose translation.
If you want to know why people go ga-ga over poetry, read Stephen Mitchell’s translation of The Iliad and/or Emily Wilson’s translation of The Odyssey.
If you are a sensitive soul who enjoys feeling deeply, check out All the Light We Cannot See by Anthony Doerr.
If you like books that are erudite and formally creative, you might love Life After Life by Kate Atkinson and/or A Visit From the Good Squad by Jennifer Egan.

YA authors killed the ancient literature retelling game this year, showing us how to think with ancient texts both respectfully and critically. Books that I would love to hear more readers shouting about are Fireborne by Rosaria Munda and Lifestyles of Gods and Monsters by Emily Roberson (as well as the aforementioned Lovely War). I refer you to my previous discussion of Munda and Roberson's wonderful reads here.

Today? Why it's Christmas Day! - What's a book that always gets you in the mood for Christmas (apart from A Christmas Carol)?

The parenthetical put me in a tight spot since A Christmas Carol is the book I read every Christmas. Besides Dickens’ classic, though, I’ve also turned to Miracle on 34th Street by Valentine Davies (a novelization of the film), A Highland Christmas by M. C. Beaton, and A Child’s Christmas in Wales by Dylan Thomas to put me in a festive spirit.

And I cannot neglect a new favorite: The Afterlife of Holly Chase by Cynthia Hand, which I discovered last year and reread this year. It’s an uplifting, funny, and clever retelling of A Christmas Carol that I expect to be rereading for years to come.

The Muppet Christmas Carol - Your favorite film adaptation of a book

This one is easy: Hugo, Martin Scorsece's film adaptation of Brian Selznick's bestselling novel “The Invention of Hugo Cabret.” Both are set in Paris between World Wars I and II and explore the need to find meaning and purpose. It is rare indeed for me to be unable to decide which I love more, the film or the book. In this case, both captivated me, made me feel deeply, and lifted up my heart.