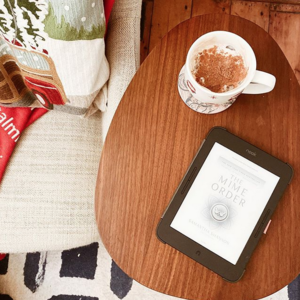 Part of me is not ready to look ahead to 2020. That part of me wants to remain securely grounded in the present moment, enjoying the season of fairy lights, eggnog lattes, and holiday cheer.

But ready or not, 2020 is almost here, and better ready than not. Agree?

Besides, addressing my 2020 calendar has its upsides. Among them, I’ve discovered that it promises to deliver sequels to series that I started this year and can’t wait to continue. Here are seven that I have my eye on, all fantasy ranging from middle grade to adult:

The Daevabad Trilogy by S. A. Chakraborty

I devoured the first two books in this series, City of Brass and Kingdom of Copper, in May. Set in a magical Middle Eastern kingdom, the eponymous Daevabad, the series follows a cast of characters with competing beliefs and who occupy diverse places within their society’s political and social strata. This series taught me that I like political/court intrigue when it’s set in a fantasy world and explores complex questions and problems that defy easy answers.

The third book, Empire of Gold, is scheduled for release in June and is 800 pages. Picture me rubbing my hands in delight as soon as I’ve finished typing this sentence.

The Aurelian Cycle by Rosaria Munda

The first book in the series, Fireborne, was released this year and follows two teen dragon riders, Annie and Lee, living in a people’s republic inspired by Plato’s Republic. Under the old regime, Lee was a member of the aristocracy and Annie a member of the peasant class. Under the new system, everyone is given an equal opportunity to excel, but is that enough to create a just society? Munda explores complex questions about power, loyalty, and the fragility of ideals with sensitivity and nuance. I cannot wait to see where she takes these characters’ stories.

No word on the title of the second book in the series or when exactly in 2020 it will be released. As eager as I am to read it, I hope Munda feels no pressure whatsoever to rush out the story. As for me, I’ll be waiting whenever it arrives.

I just finished the first book in White’s new series, The Guinevere Deception, this month. Historically, Arthurian reception doesn’t especially call to me, but I read a primary source for it earlier this year, Geoffrey of Monmouth’s The History of the Kings of Britain. Perhaps that has made me, ahem, receptive. I’m still working out how I feel about the plot twists in the second half of the book. Whatever conclusions I draw, I am curious to see how White will build on this story.

Trials of Apollo by Rick Riordan

Riordan’s third series set in the Percy Jackson universe follows the humbling of the god Apollo. Zeus has sentenced him to a stint as a mortal teen, punishment for his having backed the wrong side in the previous war. To recover his prophetic powers and his immortality, Apollo goes on—what else?—an epic quest. Naturally, familiar demigods from Riordan’s two previous series in this universe help Apollo along the way. The baddies are Roman emperors, and I approve (insert cheeky wink).

The fifth and final book is titled The Tower of Nero and comes out sometime next year. I simultaneously am anxious to see how Riordan will conclude the series and don’t want it to be over.

The Mirror Visitor by Christelle Dabos, translated by Hildegarde Serle

The first two books in this series, A Winter’s Promise and The Missing of Clairedelune, pleasantly surprised me with their whimsy and charm (as expressed in their translations). The series revolves around Ophelia, who is able to read an object’s history through touch and to travel through mirrors. Seeking a political alliance, the matriarchs who run her society arrange her marriage to man from a faraway country where illusion is everything. Ophelia must determine who to trust and use every skill and ability at her disposal to survive.

The second book ended on a huge cliffhanger, making the wait even more sweetly excruciating. The English edition of the third book, called The Memory of Babel, is scheduled for May release.

This British middle grade export follows the trials (and tribulations) of Morrigan Crow, a cursed child who is blamed for all the woes that befall her fellow citizens. A prophecy claims cursed children die on their 11th birthdays, but Morrigan does not die. Instead, a chap called Jupiter North whisks her away to a hidden world. It’s a whimsical world populated by quirky, lovable characters. There are adventures. There are mysteries. I look forward to book three.

Titled Hollowpox, it's scheduled for publication in August.

The Bone Season by Samantha Shannon

Shannon’s debut series follows a clairvoyant called Paige Mahoney who lives in a dystopian London where clairvoyance is a crime. Shannon’s imaginative scope is impressively broad, and her world is fully and richly imagined. From the first chapter, she immerses readers into this strange new world, with its own rules and language. What makes it work, for me, is the consistency of Shannon’s vision. That consistency enables me to catch up gradually, holding my interest even in moments when I'm grasping to keep up. Currently, I’m halfway through the second book, The Mime-Order.

I also have book three, The Song Rising, to keep me busy until the 2020 release of the as-yet-untitled fourth book.

What books are you looking forward to in 2020?