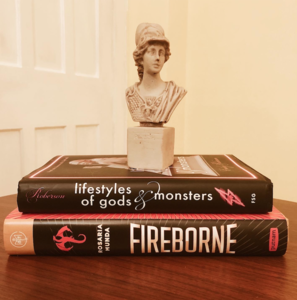 One of the first things you might notice when you read a range of ancient texts is that myths are not stable. Within antiquity, they change over time, according to who is telling the story, when it’s being told, and for what purpose it’s being told. There is no canon of Hellenic mythology, no “official” accepted versions. Homer and Hesiod are the earliest written sources, but they are themselves reception of oral stories that had been passed down the years. This leads us to the foundational element necessary for a successful Hellenic myth retelling:

Hellenism heavily influenced Rome, but the two cultures were distinct. Their differences manifest in the stories they told. The Odyssey, for example, depicts a man attempting to return to his beloved kingdom, wife, and son. None of these are particularly significant in the broader world, but they matter to Odysseus because he belongs to them and they to him. The Aeneid, on the other hand, follows a Trojan royal as he sets out to found an empire. His journey demonstrates Rome’s cosmic destiny.

Both stories’ foundations lie in the Trojan war, but they exemplify opposing values. The Aeneid proceeds from a single exemplary man to a larger empire while The Odyssey shrinks from the broader Achaean (one of Homer’s terms for the Hellenes) world of heroes and battles to one evidently flawed man’s quest to return to his mortal family and small kingdom.

After the Roman conquest, Hellenic and Roman cultures increasingly merged, and in some instances, only the Roman written sources of myths believed to have originated in Hellas have survived complete. This can make it easy to overlook or forget the two cultures’ significant differences and represent them as if they are a single entity called “ancient Greek mythology.” Greek is, of course, the name that the Romans gave to the people who called themselves Hellenes.

One exception to the practice of conflation is Rick Riordan. His Heroes of Olympus series not only acknowledges but also plays on opposing Hellenic and Roman values. The differences serve as a central plot feature that can inspire readers to reflect on history. The series enlightens while it entertains, and we can’t say fairer than that.

I’ve just said that, within the ancient world, how Hellenes told their stories shifted over time. Homer’s depiction of Odysseus is not Sophocles’ or Euripides’. But accepting these differences, enduring beliefs and values followed the Hellenes across history, even into modern times. These beliefs and values take different forms. Inevitably, they’re not true for every person who holds a national identity card issued by the Hellenic Republic or who defines him or herself as Greek, in one way or another. But they are characteristic of Hellenic culture, wherever and whenever it has existed.

These beliefs and values are not as static entities but tensions between competing desires and needs, distilled as follows:

Fiction and poetry that draw on Hellenic myths thoughtfully acknowledge and explore these tensions. One of the best examples that I have read this year is Emily Roberson’s Lifestyles of Gods and Monsters. In her novel, the labyrinth is the site of a fight-to-the-death reality show pitting Athenian tributes against the Minotaur. Her Ariadne struggles between competing responsibilities and desires—to her siblings, her parents, her friends, her community—without simplifying them. Her novel shows how an ancient story can have resonance in the modern world, without judging that story or trying to "improve" or "correct" it.

One setting is conspicuously absent from this list. Retellings set in antiquity are exceedingly difficult to get right. They almost always read as anachronistic. Novels like Madeline Miller’s Circe that attempt to rewrite the past within a more appealing contemporary sensibility feel uncomfortably like appropriation. They draw liberally on ancient source materials that lie outside of authors’ own cultures but without seeming to understand or respect those source materials as products of a distinct culture and time.

Setting ancient stories, characters, or concepts in the present or in a unique fantasy world allows authors to distill what remains constant across human experience—longing, fear, love, etc.— without judging a past and culture that are beyond one’s own experience. A thought-provoking example is Kamila Shamsie's Home Fire, which meaningfully draws on the story of Sophocles’ Antigone to explore tensions among religion, politics, and belonging in a Pakistani-British community of modern London.

Using the myths to think with

Following from the above, the best ancient reception recognizes the paradox that universality and difference coexist and uses the universal to explore the particular.

In addition to Shamsie’s novel mentioned above, Emily Roberson crafts a very modern story about the corrosive effects of transforming reality into entertainment through the lens of the Theseus and Ariadne myth. The Minotaur and the labyrinth provide the foundation for Kate Atkinson’s examination of espionage in Transcription. Plato’s Republic and Virgil’s Aeneid provide a frame for considering empire, power’s corrupting effects, and how good ideas can go bad in Rosaria Munda’s Fireborne.