Freshly Inked: "Not Our Kind" by Kitty Zeldis 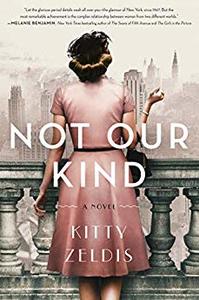 Touching on the same themes as many popular novels set during World War II, this well-written and engaging novel takes place in New York City two years after the war has ended. The story is set in motion when the taxicabs Eleanor Moskowitz and Patricia Bellamy are riding in get into an accident, the chance event causing their completely different worlds to collide.

Patricia invites Eleanor back to her apartment—a restricted building on Park Avenue—to help her calm down and gather her wits. Eleanor forms an immediate bond with Patricia’s daughter Margaux who has recently been disabled by polio. Patricia decides to hire Eleanor as Margaux’s private tutor with one condition: Patricia insists that Eleanor use Moss as her last name instead if Moskowitz. Patricia would be mortified if anyone found out she had hired a Jew whose mother runs a hat shop. Because she feels a connection to Margaux and desperately needs the job, Eleanor concedes, but the decision makes her feel uneasy, like she’s forsaking all the unfortunate souls who perished in Europe during the war.

“The news of the camps, the tattoos, the gas chambers, the multitude of tortures tailored and perfected for Jews. Adolf Hitler had systematically tried to annihilate her people. He hadn’t succeeded, but his murderous goal made her want to ally herself more closely with those who’d survived. Moskowitz was the shorthand for the connection she felt, the thing that announced who and what she was. By giving it up, she’d be giving up a part of herself too.”

As Eleanor spends more time with the Bellamy family, her connections with both Patricia and Margaux deepen, despite the rude and often inappropriate behavior of the patriarch, Wynn Bellamy. When Wynn shows up uninvited to Eleanor’s room one night, their relationship takes a sinister turn, changing the relationship between Eleanor and the Bellamys forever. Eleanor chastises herself for thinking she could ever fit into this foreign world.

“She’d been so woefully naive, thinking she could come up here and, with the flimsy protection of an assumed name, meld seamlessly into a pattern of life that was defined by its exclusion of people like her.”

Zeldis does a commendable job exploring the anti-semitism of post war New York. The alternating viewpoints of Eleanor and Patricia afford the reader a view from both sides of the issue, fostering an understanding of why each character does the things they do and says the things they say.

I had the pleasure of hearing Kitty speak about the inspiration for this novel. As a Jew from Brooklyn, her college experience at Vassar opened her eyes to a world of anti-semitism that she’d never known existed growing up. Though she enjoyed her college years, she never felt like she truly fit in, always somehow other, amongst those who were not her kind.