10 Great Short Works to Read in One Sitting 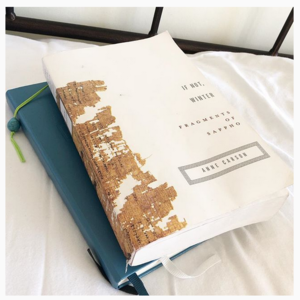 With Dewey’s 24-Hour Readathon on the horizon (Saturday, Oct. 26), I’ve been pondering my readathon strategy. Do I want to pick one brick of a book in the hopes of knocking it off in a single day (hello, Name of the Wind), or do I go for several shorter books to keep things fresh?

If history is any indication, it’s highly unlikely that I’ll decide until the day before...or of. Meantime, I’ve put together some of my favorite short works from the last few years— whether you’re participating in Dewey’s, looking for quick reads in hopes of hitting your Goodreads challenge, or just because you enjoy a great short book.

Daisy Jones and the Six by Taylor Jenkins Reid

I experienced this book on audio and cannot emphasize enough how fun it was to listen to the story unfold. The novel essentially presents as an oral history of a band called The Six, a singer called Daisy Jones, and the collaboration between the two. The relationships among band members and the singer also figure prominently. I can’t say how it would work as a written text, but the audiobook featured multiple narrators that gave each character a distinct voice (literally and otherwise). And Reid kept the surprises coming up to the end.

Works and Days by Hesiod, translated by A. E. Stallings

You had to know there would be at least a few works of ancient literature on this list, eh? Works and Days dates to somewhere in the 8th - 7th centuries BC and features advice from Hesiod, the poet, to his ne’er do well brother Perses. Wrapped around this advice is a discussion of what justice is and why we should care, archaic Hellas style. It also contains the earliest written source for the Pandora myth, if that interests you. I recommend Stallings’ translation in particular for its transporting verse and atypical and thought-provoking introduction.

This autobiographical middle-grade novel follows Anna and her German-Jewish family in the lead-up to Hitler’s election in 1933. Anna’s father is a journalist who has been writing criticism against Hitler and his party. Fearful of having his passport revoked, he flees Berlin, and his family follows. Against this tension and trauma are the perceptions of a child on the cusp of adolescence. It’s beautiful and moving with eloquent descriptions and memorable characters.

One of my favorite novels by Morrison, Sula tells the story of two woman, Nel and Sula, who grew up together in small town Ohio. A tragic event changes both their lives, sending them reeling in opposite directions. When they reconnect as adults, well, obviously I can’t tell you what happens, but it packs a powerful punch in a very small space.

This is another book I listened to in audio, so I cannot attest how it works if you’re reading it with your eyes. I enjoyed the narrators’ rendering of this reimagining of the Atlas and Heracles myths. It ponders the tension between choice and destiny and managed to surprise me and make me think about the myths in a new way.

This is called an adaptation instead of a translation because Mitchell worked with other translations rather than the original text. This is to say, if you’re a scholar of/expert in Mesopotamian mythology, I don’t know how you’ll feel about it. But if you’re a reader looking for a fascinating ancient story rendered in compelling verse, and you’re interested in eastern influences on Homeric epic, this narrative of a king who goes on a quest should satisfy.

Another Brooklyn by Jacqueline Woodson

I haven’t yet read Woodson’s latest, but Another Brooklyn was one of my favorite reads of 2016. The story revolves around a group of friends in 1970s Brooklyn, but it’s not the plot or setting that has stayed with me. It’s the mood evoked by Woodson’s enchanting prose. I felt, reading the book, that its lyricism cast a spell on me, and I read it in one breathless sitting.

If Not, Winter: Fragments of Sappho, translated by Anne Carson

I got the best kind of chills reading this translation of Sappho. In most of the translations I’ve read, translators reconstruct the fragments without providing readers with a means of consciously reflecting on what’s missing. Carson, however, inserts brackets to indicate where the breaks occur, consistently drawing attention to the fact that what we’re reading is partial. Making me conscious of where breaks occur makes me wish more than ever that we had more complete works.

I do love a cozy mystery this time of year. Extra points if we can pair it with a blustery day, with intermittent rain, a fireplace (gas, electric, wood-burning—I’m not fussy), and an iced latte of a seasonal sort. Beaton’s Hamish Macbeth series is set in the Scottish Highlands and are sweet, funny, and just so endearing.