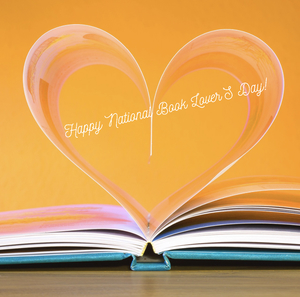 We all know that I don't need an excuse to seek out books about books. The self-referential, meta aspect of reading them is just too delicious.

Nevertheless, since it is Aug. 9, and Aug. 9 is National Book Lover's Day, here is an updated list of some of my favorite books about books. Let me know yours in the comments?

The sheer absurdity of this one makes it my hands-down favorite. St. Aubyn's satirical novel is a send-up of a well-known British literary award and revolves around several of the players involved: an author whose publisher accidentally sends the wrong book to the prize committee, a judge mired in scandal, and a writer spurned from the short list and eager for revenge.

The plot can best be described as madcap with an underlying tenderness at its core, especially as regards the characters, whose story-propelling flaws are treated gently, and the affectionate if at times ridiculous portrait of those who believe in the power of books. I can only hope St. Aubyn had half as much fun writing as I had reading it.

Bookworm: A Memoir of Childhood Reading by Lucy Mangan

Mangan revisits beloved books of her childhood, explores the publishing industry and its history, and tells the stories behind a few of her favorites. I enjoyed her discursive style, hilarious family anecdotes, and self-deprecating humor, but the best part was discovering another human soul who spent childhood birthday parties with her head in a book. See, mom? I'm not the only one.

Tilly and the Bookwanderers (Pages & Co. #1) by Anna Jame

The first book in a new middle grade series, Tilly and the Bookwanderers follows the adventures of the eponymous Tilly who discovers she has the abilities to pull literary characters out of books and to travel into their worlds. She journeys into Alice in Wonderland, Anne of Green Gables, and A Little Princess, in the process uncovering a surprising family secret.

"A Jane Austen Education: How Six Novels Taught Me About Love, Friendship, and the Things That Really Matter" by William Deresiewicz

Deresiewicz's memoir was part of my 2013 Year of Jane Austen, my personal celebration of the 200th anniversary of "Pride and Prejudice" that consisted of reading Jane Austen, Jane Austen fan fiction, and Jane Austen memoirs. Good times!

"A Jane Austen Education" tells Deresiewicz's story through the lens of his reading her novels. Each novel corresponds with a stage of his adulthood and provides lessons learned. He includes copious and engaging literary analysis and history, and his reading of the novels was, in particular, insightful and interesting. Also, it's inspiring to see a 21st century dude relating to and learning from the experiences of early 19th century female heroines.

If this doesn't illustrate the power of literature to connect us, I just don't know what will.

"Sorted Books" fulfills a book lover's insatiable appetite for pictures of books, but with so much more. For 20 years, conceptual artist Katchadourian has entered public and private libraries to sort through their titles, arrange them into found poems, and photograph the results. A poetry-sculpture-photography hybrid, "Sorted Books" documents her work with beautiful photos of artfully arranged books, accompanied by the poetry created from the titles and reflections on her process. You don't have to be a poet or poetry enthusiast to appreciate her work or to look at your own collection with fresh eyes.

Katchadourian's results are at times moving, philosophical, revealing, and humorous, and her project has inspired writers and bibliophiles around the world to experiment with her method.

“Possessed: Adventures with Russian Books and the People Who Read Them” byElif Batuman

Smart, funny, melancholy, Batuman's memoir melds literary journalism and analysis with deeply revealing personal stories. She writes about classic Russian authors (Tolstoy, Pushkin, Dostoyevsky) in a way that’s familiar to me from my own days as a graduate student, but you don’t have to be an academic to appreciate her storytelling. Her exquisitely crafted scenes—which quietly echo the kind of wry observations and pathos-filled characters you might find in some of the Russian novels she discusses—include a summer spent studying in Uzbekistan, an Isaac Babel conference, and her pilgrimage to St. Petersburg to visit a replica of the 1740 House of Ice, originally created at the behest of Empress Anna, niece of Peter the Great.

And she has one of the best last lines I have ever read in a book of this kind, which I promise won’t spoil it for you:

"If I could start over today, I would choose literature again. If the answers exist in the world or in the universe, I still think that’s where we’re going to find them.”

"Tolstoy and the Purple Chair: My Year of Magical Reading" by Nina Sankovitch

Among the lessons Westport author Nina Sankovitch learned during her year of reading and reviewing a book a day, on which her memoir is based: while we often think of it as solitary, reading is actually a deeply connecting and social experience.

Sankovitch undertook her reading project as a tribute to her sister, who died after a brief illness at the age of 46, and as a way to answer for herself why she had been given "the life card." In the process, reading became the foundation for a common experience that connected her not only to friends and family but also to readers from around the world who wrote to her, to distant cultures, and to the past. And her year of reading brought her back to a place of hopefulness about the future.

Though the memoir reveals how Sankovitch, a wife and mother of four sons, managed to get through a book a day—she stuck, for the most part, with books fewer than 300 pages—and includes extensive discussion of the books she read, it is not a collection of book reviews. Talking about books becomes an occasion for her to examine her life and relationships, past and present. Good books, she discovers, illuminate universal human experiences and, through this, connect readers across time, culture, and history.

In Sloan's debut novel, after art school graduate Clay Jannon loses his job designing logos for a bagel company, he accepts a job working the late shift in the titular 24-hour bookstore whose most requested inventory is books written in a mysterious, indecipherable code. As Clay works to uncover the relationship between his quirky customers and their books, he draws on the resources of his friends, wrestles with the limits of technology, and discovers the nature of immortality.

The book reads like a delightful mystery (meaning no one is killed), with a cast of imperfect but kind and ethical characters pooling their knowledge and traveling across the country to help Clay discover the secret behind the bookstore's existence. But what they really find is the meaning of life. If you like to feel good after you finish the last page of a book, you will probably adore this novel.

I think I actually hugged this book after I read the last line, and then I wanted to turn back to the beginning and start all over again. Also, it's helpful to know or look up the meaning of the word "penumbra."

"My Bookstore: Writers Celebrate Their Favorite Places to Browse, Read, and Shop" edited by Ronald Rice

Passionate readers tend also to be passionate about where they shop. Rice's collection celebrates independent bookstores, the books within them, and the relationship among writers, the books that inspired them, and the shops that provided them. Over 80 beloved writers contribute short essays describing his or her independent bookstore, the pivotal one that supported their growth and development.

The essays are beautifully crafted, funny, moving, and they may quite possibly inspire readers to drive to their nearest indie straightaway. The book begs to be browsed through, just as one would in a bookstore. Each entry includes a black and white sketch of the bookstore under discussion, so it's pretty, too!

Book and foodie cultures meet between the pages of Fried's book, which began as a project she did while a student at the Rhode Island Institute of Design, in which she imaginatively re-created and photographed five meals from famed novels. The concept blossomed into the 50 featured in her book, from a children's picture book ("Blueberries for Sal") to capital-L-Literature ("Lolita," "To Kill a Mockingbird," "Confederacy of Dunces"). Included with the photos are the quotes that inspired her tableaux and facts about the food, author, and/or book.