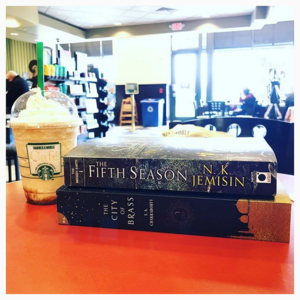 My passion for one of humanity’s oldest fantasy books is well documented (by me). But I haven’t told you about one of the interesting consequences of reading Homer The Odyssey over and over (and over). It has inspired me to explore the many intriguing fantasy books being written in our own time, by contemporary authors, who are still in the process of writing sequels.

I hadn’t thought of myself as a fan of fantasy. The mere idea of reading J. R. R. Tolkien exhausts me. Game of Thrones...isn’t that a tv show? Dragons and vampires and what now? But this was quite silly of me. And not just because I have some dozen different translations of The Odyssey on my bookshelves and a bust of Homer on my desk. I’m also a fan of Harry Potter, Keeper of the Lost Cities, and everything Rick Riordan writes. Hello? Self? That’s called fantasy. Or speculative fiction, if you prefer a more denotative term.

So really, I’ve always liked fantasy/speculative fiction, when it was specifically recommended to me. But I hadn’t made a point of prowling its designated aisles in the bookstore until this year. Friends, I am so glad that I did because I’ve discovered four series that I can’t wait to read more of, as soon as possible. This will be a challenge because some of these books are tomes and some have yet to published. But anyway…

A fantasy series set in a mystical library revolving around a librarian who is also a spy? Jackpot. I love books about books, magical elements, and spy stories. I read the first book in April and have the second one waiting for me in my Nook.

Hey, did you know Game of Thrones was a book first? Haha, of course you did. Me too, but I thought it would too violent for my delicate sensibilities. It is violent, but not as excessively as I feared (yet? warn me, please!). Plus there are pathos, intrigue, and atmosphere that absolutely have me hooked.

I finished The Fifth Season, the first book in the series, earlier this month and found it utterly engrossing. The Fifth Season begins in a world hammered by catastrophic geological events. Against this backdrop, we follow three timelines that gradually come together. Jemisin’s world-building feels seamless, and her prose is mesmerizing.

The Daevabad Trilogy by S. A. Chakraborty

Another one I finished earlier this month, it begins in 18th century Cairo, where 20-year-old Nahri is struggling to survive by her wits (and her magical healing abilities), until she unwittingly summons a djinn warrior. And then things get complicated. I cannot wait to read book two, but I should because I’ll have to wait for the third one, which has not yet been published.