On Reading "The Time Machine" by H. G. Wells 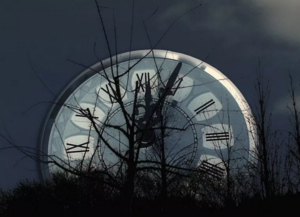 Though time travel novels are a favorite of mine, I’d not, until recently, read the one that started them all: The Time Machine by H. G. Wells. It’s one of the few time travel novels I can recall reading in which the main character travels to the future. Reading it made me realize how fixated I am on time travel to the past. I don’t seem to wonder as much about life in the future. I’m not sure what that says about me and whether I should like it, but there we are.

Wells’ classic, published in 1895, is credited with coining the term “time machine” and spawning the science fiction genre. It begins with a group of men discussing the nature of time and space. A scientist/inventor, known only as The Time Traveller, tells the group that time is a fourth dimension through which humans can move. He demonstrates with a tiny machine he holds in his hand. Before the men’s eyes, the machine vanishes. The Time Traveller claims to have sent it into the future.

At their next gathering, the men hear the story of The Time Traveller, who takes over as narrator. He describes his experiences traveling to the year 802,701, where he encounters two human-ish creatures – the Eloi and the Morlocks – in a desolate landscape of crumbling infrastructure and underground lairs. The Eloi, who live on the surface, are soft, helpless, and harmless. Meanwhile, the Morlocks live underground, ascending at night for sinister purposes.

The story is mesmerizing and haunting and, I’ve read, meant to comment on the Victorian era. I perceive that in the narrative’s skepticism towards the notion of progress, the idea that we move – or can move – steadily forward, gradually perfecting ourselves. As I’ve written before, I’m more inclined to believe cyclically rather than linearly about human progress. Steady forward progress would be ideal, obviously. But I don’t see as much evidence to support the notion historically. The desire for it, though, and the fear that we’re not actuating it persist, which may explain, at least in part, why The Time Machine continues to be read today. I don’t suppose it’s for the Victorian critique, in particular or isolation.

The Time Traveller is repeatedly struck by the Eloi’s incapacities. They’re kindly but hapless. He observes, “It is a law of nature we overlook, that intellectual versatility is the compensation for change, danger, and trouble. […] There is no intelligence where there is no change and no need of change. Only those animals partake of intelligence that have to meet a huge variety of needs and dangers.”

If we actually achieved the ideals we seek (in the context of the narrative, comfort and ease), the story seems to say, they would destroy us. This reminded me of what Azar Nafisi cautions in Reading Lolita in Tehran: “Be careful with your dreams. One day they may just come true.”

Later, a character remarks of The Time Traveller, “He, I know – for the question had been discussed among us long before the Time Machine was made – thought but cheerlessly of the Advancement of Mankind, and saw in the growing pile of civilization only a foolish heaping that must inevitably fall back upon and destroy its makers in the end. If that is so, it remains for us to live as though it were not so.”

It’s may not be the most cheering thought. But if hope is to be found, perhaps it’s in committing continually to strive, never to rest in the surety of our ideals, to recognize that even those ideals themselves can only ever be as imperfect as we are.

This piece was originally published on sallyallenbooks.com.