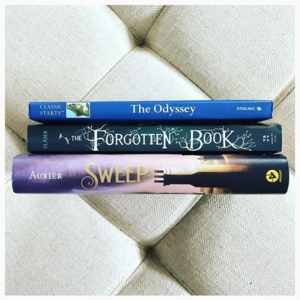 My reading slowed down considerably in March due largely to a two-week trip I took to Greece to visit family. I did so very much visiting, in fact, that it was hard to find time for leisure reading, though I wouldn’t have it any other way. It did made me confront how little socializing I do in my regular life, but anyway. Now for the fun part: the numbers and recaps.

Full list of books read (in order of reading):

The Light Between Worlds by Laura E. Weymouth

This novel had an interesting premise: As bombs drop on London during the Blitz, three children escape to an alternate wonderland … where war also breaks out. However, the story is not about their magical escape. Instead, it deals with the aftermath of their return. Like I said, it was an interesting premise…

The Forgotten Book by Mechthild Gläser

A YA retelling of Pride and Prejudice, set at a boarding school. Headmaster’s daughter Emma discovers a magical book: Whatever she writes in it comes true. This was a fun romp with magical realist elements.

Theogony and Works and Days by Hesiod, translated by M. L. West

Hesiod’s two poems are among the earliest texts we have from ancient Greece (it’s debated whether he or Homer came first). Theogony is a genealogy of the Greek gods while Works and Days is a didactic poem featuring the myths of Prometheus and Pandora as well as lines and lines of farming and seafaring advice and a list of lucky days.

The Bookshop of Yesterdays by Amy Meyerson

An enjoyably engrossing family drama about Miranda, who as a child loved her uncle’s scavenger hunts. Then he disappeared from her life. Years later, she discovers he has died and left her his bookshop as well as the clues to one last scavenger hunt that reveals the secrets behind his mysterious disappearance from her life.

Girls of Paper and Fire by Natasha Ngan

This is a fantasy YA novel in which a kingdom is divided into three castes. Lei belongs the lowest, Paper. She lives a quiet but fulfilling life working in her father’s shop. Until her golden eyes attract the attention of a royal guard, who kidnaps her and presents her as a gift to the king. She unwillingly becomes part of his harem, and drama, danger, and a major cliffhanger ensue.

The Toymakers by Robert Dinsdale

This historical, magical realist novel is set at the Emporium, a magical (literally) toyshop in London, during the first half of the 20th century. It follows the fates and fortunes of two brothers, heirs to their father’s shop, and Cathy Wray, who runs away from home at 16 to work at the shop. The blurb compares it to Erin Morgenstern’s The Night Circus and Jesse Burton’s The Miniaturist, and that is fair enough.

We All Looked Up by Tommy Wallach

Oh look, it’s another YA novel. This one, which I listened to on audio, is pre-apocalyptic. It follows four teens as they grapple with how they want to live what may be the last two months of their short lives after they learn an asteroid is on a collision course with earth. It’s a slow burn, but the final third ratchets up the drama and pathos.

I have a nonfiction book on the Amazons and thought it would be interesting to read a novelization of them as well. My expectations were not high, so there was nowhere to go but up, really. I ended up pleasantly surprised by the application of ancient Greek concepts and myths. Though some of the dialogue and camaraderie among the cast felt forced at times (like filler between the action sequences), the handling of ancient Greece made this a fun read for me.

Sweep: The Story of a Girl and Her Monster by Jonathan Auxier

A historical middle grade novel about Nan, a young orphan who serves as a chimney sweep in Victorian London, and the “monster” she raises. Read it and weep. Literally.

How was your March? Travel anywhere interesting, exciting, or otherwise noteworthy in books or real life?