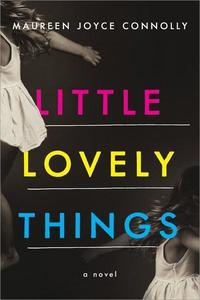 For some reason, I’ve read several books in the past few weeks that center on children in peril—kidnappings, mysterious disappearances, murders in the woods. I don’t actively avoid books like this, but I also don’t seek them out. These books found me. Perhaps it’s a subconscious choice—if I read about these horrible things on the page, maybe it  will prevent anything like this from befalling me or my children.

Little Lovely Things is the debut novel of author Maureen Joyce Connolly, whom I had the pleasure of speaking with on the phone recently. Two things about this book are shocking—the first that a book this gorgeously written and effortless could possibly be a debut and the second that a woman so friendly and vivacious could have written about such brutal and disturbing events. The story follow Claire Rawlings, a medical student, wife, and a mother of two little girls. On the way to work, Claire becomes violently ill and is forced to stop at a gas station, leaving her girls in the car with the motor running. When she returns, she encounters a mother’s worst nightmare. The car is gone.

The rest of the novel is brilliantly structured, switching between perspectives from Claire to Moira, one of the kidnappers who desperately wants a child of her own, to Jay White, a bystander with a checkered past, to Colly, one of Claire’s kidnapped daughters. Each character is beautifully developed and real, and Connolly did a marvelous job integrated the characters’ ethnic backgrounds and native languages into the story—Moria is an Irish traveler, and Jay is Native American. No matter which character we are with, Connolly somehow manages to get the reader on their side, using backstory and realistic details to engender empathy and understanding. This novel defies characterization, but I think it’s much more family drama than thriller.

One of my favorite aspects of the book is the wonderful descriptive language. The fresh and unique turns of phrase really make the scenes come alive.

Here are a few of the many I highlighted:

“Curling her spine forward like a small shrimp in its shell”

“The arabesques of frost on the windshield in the winter”

“The sun, which was warm and bright and caramel flavored”

The rich mellow odor of old crayons, so different from the plastic-y new ones”

Every character has their fair share of trauma and grief, but Connolly does a remarkable job with the ending, a heartbreaking combination of sadness and hope. Little details carefully placed along the way come together in a just right ending, which is also a long-awaited new beginning for the Rawlings family.