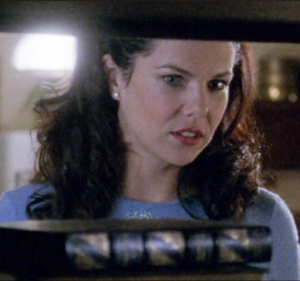 Lorelai: I never read Proust. I always wanted to. Every now and then, I’m seized with an overwhelming urge to say something like, 'as Marcel Proust would say.’ But of course I have no idea what Marcel Proust would say, so I don’t even go there. I could do, ‘as Michael Crichton would say,’ but it’s not exactly the same, you know?
Max: Take it.
Lorelai: Oh no, it looks so valuable.
Max: It’s a book. It’s meant to be read.
—Paris is Burning (season 1, episode 11)

I can’t honestly say an urge specifically to quote Proust has ever seized me. I have issues with French literature (which I explored, in GIFs, here). Apparently, though, I was seized by an urge to buy “Swann’s Way,” the Proust book Max lends Lorelai in the above scene. Then again, I'm seized by an urge to buy lots of books, all too often. Anyway, I do own a copy of “Swann’s Way” and did attempt to read it. Emphasis on “attempt.”

“Swann’s Way” is the first of a seven volume colossus Proust penned called either “Remembrance of Things Past” or “In Search of Lost Time,” depending on the translation. The Modern Library’s translation of the full seven volumes is a whopping 4,000+ pages. When Lorelai returns home from Max’s apartment and shows Rory "Swann's Way," Rory says, “aren’t we ambitious.” Cough *patronizing* cough. Rory tells Lorelai it took her “forever” to read, and she had to renew the book 10 times. “Swann’s Way” is only about 500 or so pages, depending on the edition. But having attempted to read it, I can see why it would take forever, or feel like it.

I found it excruciatingly boring. Emphasis on “excruciating.” I remember something about how eating a madeline triggered his memory. He had trouble sleeping as a child, and he both looked forward to his mother’s goodnight kiss and dreaded it as a harbinger of a long night of restless non-sleep. He writes about his parents having a dinner party that kept his mother from giving him a goodnight kiss, and this was deeply unsettling or him. I think? It’s hard to remember because I quickly abandoned the book, with no intention ever to return to it. Emphasis on "ever."

I don’t honestly know why I found it so painfully dull. Hoping to glean insight into the magic of Proust, I read Alain De Botton’s “How Proust Can Change Your Life.” I found it ... less boring than Proust. Meaning, I was able to finish it, but I was skimming towards the end. I’m sure both are excellent books, in the hands of readers who appreciate them. To quote Emily Gilmore, “It’s not my taste, but I respect the attempt.”

Having spent most of my adult life in academia, I’ve noticed academics have a tendency to fetishize texts they see as intellectually challenging. There is satisfaction in reading “hard” books. It’s the intellectual version of pioneers who find satisfaction overcoming tremendous physical challenges. Or people who share videos of themselves working out on Facebook. Doing hard things is meaningful when it teaches us about ourselves. Emphasis on "when."

The academic mentality is evident in Rory’s condescending “aren’t we ambitious” comment. But I also like how the episode pushes back. Loreali returns the book after reading 20 pages, which she says was one sentence. That may be hyperbole (or not?), but I love that she pokes fun at it. I love that she says a book with a sentence that runs 20 pages long is not for her. And I especially love how Max says books are meant to be read, even really pretty, expensively bound editions like the one he lends Lorelai. Books aren't sacred by themselves. They're sacred to readers who connect with them.

Books are meant to be read, of course. Just not by all of us. Lots of books are hard to read. Some I will value the experience of reading. Some I will not. It can be good to do hard things, as long as we remember it’s not the fact of being hard that itself confers meaning. It's what we make from that hard experience.