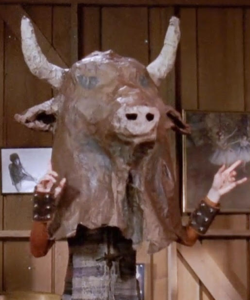 Rory: This place is like a labyrinth.
Logan: Well if you get lost, just keep your hand on one side of the wall and keep walking. Eventually you’ll find your way out or get eaten by a Minotaur.
—Bridesmaids Revisited (season 6, episode 16)

The “place” Rory refers to in the above quote is Logan’s family home. On his sister Honor’s wedding day, Logan and Rory arrive for the pre-wedding primping.

While the massive home may indeed be maze-like, the more pointed significance of the labyrinth analogy isn’t about house size and layout. It serves as a perfect symbol of Logan’s feelings about his inheritance. Not the money itself but the family business he’s expected to take over, which he views as a trap and a prison.

The Minotaur is a mythical Greek monster with the head of a bull and the body of a man. Here is Kirk dressed up as one from the season seven episode “The Hay Bale Maze.”

The Minotaur's mother was Pasiphae and his father a magnificent white bull, a gift from Poseidon to Minos, Pasiphae’s husband. When Minos was competing to become king of Crete, he asked Poseidon to send a bull to convince the people of Minos’ legitimacy. Here’s the important bit: Minos promised to sacrifice the bull to Poseidon. So Poseidon played along. A white bull emerged from the surf. Minos became king.

But here’s the thing. That bull was magnificent. So magnificent that Minos decided to keep it among his herds and sacrifice a different bull to Poseidon. He wouldn’t mind, would he?

Um, yes. Yes he would. Like, a lot. You’d think Minos had never heard of the Greek gods.

Furious Poseidon caused the bull to go wild. Fair enough. He was promised a sacrifice, and it was not delivered. But that was just his opening move, to be followed with extreme vengeance, Greek god style.

He enlisted Aphrodite to make Pasiphae fall in love with the bull, and Pasiphae enlisted Daedelus to help her meet up with it. I will spare you the details. But if you really must know, the full story appears in “The Library of Greek Mythology” by Apollodorus, also known as “Biblioteca” by Pseudo-Apollodorus.

So dot dot dot, Pasiphae gave birth to the Minotaur (meaning “Minos’ beast”). His dietary needs involved devouring humans, so they couldn’t have him running rampant around Crete. Minos has Daedalus build the labyrinth in which to trap the Minotaur. As luck would have it, Athens needed to pay tribute—in the form of 14 Athenians—to Crete after an innocent Cretan was murdered in Athens for reasons (they vary depending on which version of the myth you’re reading). The tributes were sent into the labyrinth, where they’d get lost and eventually be devoured by the Minotaur.

Until Athenian hero Theseus (a son of Poseidon) volunteered as tribute so he could get into the maze and kill the monster. This would end the tribute requirement because a prophecy said so. Minos’ daughter Ariadne fell in love with Theseus and revealed to him the secret to escaping the maze. Then they ran off together. Until Theseus abandoned her in Naxos (or maybe Dionyses abducted her … say it with me now: it depends on the version of the myth).

What strikes me about this convoluted story—itself as twisty-turny as a labyrinth—is how much suffering is caused by one man’s bad decision. Minos chose not to follow through on his promise to Poseidon, and who pays the price? Pasiphae, the Minotaur (who didn’t ask to be born), Daedalus (who Minos traps in the maze as revenge for helping Pasiphae), Ariadne, the many Athenians (who also had nothing to do with that Cretan being murdered) sacrificed to feed the Minotaur.

Like the Minotaur and the Athenian tributes, Logan is, or at least feels, trapped in a Labyrinth of someone else’s making. It’s a maddening truth of life that our choices—good and bad—affect others. We’re all caught in an intricate web of influence that can’t be untangled.

We see this subtly in the season five episode “Norman Mailer, I’m Pregnant” when Logan grudgingly returns to the Yale Daily News office, saying “I’m just here for the pretty picture in my father’s head.” It comes up again in “Welcome to the Dollhouse” (season six, episode six), when Richard admiringly notes of Logan that the apple doesn’t fall far from the tree. Logan replies, “Not if the tree has anything to say about it.”

There’s a temptation to fault Logan for the way he responds to family pressure and expectations: by excessive partying and other shenanigans. He doesn’t have to work for his father. He could do what Lorelai did. He could run away from it all. He has a choice.

Because we’ve seen what Lorelai has been through, we know that running away has its price too, maybe financially (depending on means), but definitely emotionally. We also know that growing up with the pressure of Expectations instills a sense of responsibility to please others that can be hard to break from. If you’ve been bred for a role, it’s hard to figure out who you are and what you want outside of that role. The Gilmore Girls series is filled with characters who feel constrained by their circumstances, from Richard and Emily’s carefully choreographed social moves to Lorelai’s uncertainty about how many of her choices are reactions against her parents.

With Logan, the full impact crashes down in “Let Me Hear Your Balalaikas Ring” (season six, episode eight). Rory and Logan have a blow-out fight after a disastrous dinner with Jess. Logan is at his privileged, cringe-worthy worst, attempting to belittle Jess and display ownership over Rory.

Jess’ appearance and his news that he’s written a book highlight for Rory how far she has strayed from the path she set herself. She has dropped out of Yale and is living with her grandparents, partying with Logan, and working for the Daughters of the American Revolution, with a Birkin bag hanging off her arm. She has become everything her mother left home to escape.

Logan takes Rory’s epiphany as a personal slight, as if she is blaming him for her life derailing. She has choices, he says, but he does not. He parties because he is months away from having to start working for his father. Rory tells Logan others would kill for the opportunities delivered to him on a silver platter. “I don’t want that life,” he bitterly replies. “It’s being forced on me.” He sees “one door” available, and he’s “being pushed through it.” “I have no choice,” he says. “You try living without options.”

That’s a struggle painfully highlighted in Minos’ story, and more generally in Greek mythology ... and life in the known world. You can’t have it all. Striving to is the real trap.