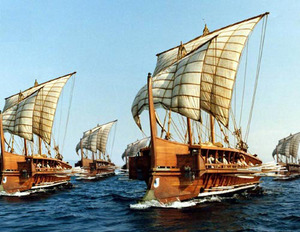 In this week’s episode of “Which Homeric character are you, Gilmore Girls edition,” let us consider Lorelai.

Interestingly, the name Lorelai is an alternate spelling of the name Lorelei (a fact my spell check reminds me of every last time I type it). But here's where it really gets interesting: Lorelei in German legend is the name of a siren who sits on a rock in the Rhine river. Her singing entices sailors to crash into her rock and expire. I didn't realize the Rhine river could be so treacherous, but there we have it.

As you may recall, Homeric myth also features sailor-killing sirens. Who can forget crazy Odysseus asking his crew to plug their ears and tie him to a mast so he could listen to the sirens' songs without being irresistibly drawn to his untimely end?

So. IF we go by her name’s etymology, Lorelai is one of the sirens whose sweet vocals lure men to their deaths. Given her track record with men on the show…yeah, I can see that.

But to be honest, I’m more inclined to equate Lorelai with Odysseus himself.

Both can make bold decisions. The Trojan Horse? Odysseus’ idea. He also came up with a cunning plot to save himself and most of his crew from the cyclops Polyphemus, and he managed to slaughter more than 100 suitors for Penelope’s hand with the help of only a couple of mortals and Athena. As for Lorelai, she left home at 16 to raise her infant daughter alone, created a meaningful life for herself in a new town, and eventually realized her dream of opening her own inn.

Both can make self-destructive decisions. For all his cleverness and resourcefulness, Odysseus makes some extremely dumb decisions. Announcing to Polyphemus—a son of Poseidon—that he, Odysseus, blinded Polyphemus was not smart at all. Especially given Odysseus planned to make his escape by sea. That’d be like dissing Zeus right before getting on an airplane. Or making out with your daughter’s English teacher. In his classroom. On parents’ day. Oh wait, that last was Lorelai.

Both can be tremendously loyal. One of my favorite things about Odysseus: Even when ageless goddess Calypso offers to make him her immortal mate, he declines. He prefers his home and his mortal wife to a beautiful goddess and her so-called paradise. As for Lorelai, remember the letter she wrote in support of Luke, even after they had broken up and weren’t speaking?

Both just want to go home, and take a long, winding journey to get there. Like I said: Odysseus wants only to return to Ithaca and his wife Penelope. Both preoccupy his thoughts during his travels. None of the places he visits and women he, ahem, “visits with” capture his heart. For Lorelai, she has a lovely physical home, both her little house in Star’s Hollow and the town itself. But it takes her a long time—seven original seasons and four revival episodes—to fully and completely commit to who she wants to share that home with. During that time, she goes through more boyfriends than I care to count, one failed engagement, one failed marriage, and one failed trip through the wilderness. But like Odysseus, she gets where she needs to go in the end.

All this raises the question, which Homeric character is Rory? Who do you think she is?