Gilmore Girls Reading Challenge: For Whom or What is Paris Named? 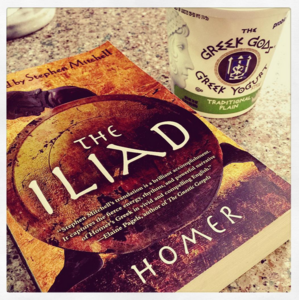 Paris: Rereading The Iliad a third time is not doing nothing. I’m not pathetic.
—Season 2, Episode 10

Of all the Gilmore Girls characters, who do you suppose is most likely to start a war?

Yes, you are correct. It is Paris. In fact, she almost did start a war, in the episode called “Die, Jerk” from season four. Who can forget her barking into her cell phone, “Stand down. Repeat, stand down,” when she realized the command to “die, jerk” was directed to Rory not to Paris herself?

This is one reason I insist she was named not for the French city (so called for the Celtic Parisi tribe, according to font of all knowledge Wikipedia) but for the Greek mythical figure responsible for causing the Trojan War. But that’s not the only reason.

The Judgment of Paris. Our Gilmore Girls Paris is very judgey. Another Paris’ judgment initiated the Trojan War.

For self-evident reasons, goddess of discord Eris is not invited to the wedding of Peleus and Thetis (Achilles’ parents). Realizing she doesn’t have to be present to stir poo up, Eris throws down a golden apple addressed “to the fairest.” Hera, Athena, and Aphrodite each think it’s meant for her, obviously. They demand Zeus judge a beauty contest among them to determine who should receive the apple.

Not being a total idiot, Zeus is desperate to get out of judging this beauty contest. He suggests Paris do it instead, since he’d done such a fab job judging a bull contest. Demonstrating the kind of reckless confidence Gilmore Girls Paris might show, Greek Myth Paris agrees. Each goddess offers him something special if he wins: Hera to make him ruler of Europe and Asia, Athena to make him a great warrior, and Aphrodite to give him the most beautiful woman in the world. Paris chooses Aphrodite’s “gift”—Helen, who was already married to Spartan king Menelaus. With Aphrodite’s help, Paris abducts Helen anyway and thus sparks the war between the Greeks (Menelaus’ allies) and Trojans (Paris’ people).

Granted, if our Paris were judging the contest, she’d probably have chosen Hera’s gift. My point stands though, as I’m confident our Paris would believe herself fully capable of judging a contest among goddesses, or gods (in the ancient world, beauty contests weren’t just among women).

Parent issues. Greek myth Paris had a rough start in life. After a prophecy says he’ll be responsible for Troy’s destruction, his parents (Troy’s king Priam and queen Hecuba) decide he needs to die immediately. Paris is exposed to the elements but is rescued by a herdsman and eventually reunited with his parents.

That may be the worst of it for Greek Myth Paris … but there’s more. After Paris’ brother Hector is killed by Achilles, Priam unloads on his remaining sons, including Paris: “Move now, you sorry excuse for men. If only/the lot of you had been cut down instead of Hector!” He goes on to lament how the best men he fathered have all died in the war, “and now I am left/with cowards, liars, pretty-boys, heroes at dancing,/parasites, loungers, robbers of lambs and kids,/who live off the people’s sweat.” Yes, Priam had many, many sons. Also … ouch.

Gilmore Girls Paris doesn’t have it quite that bad. We could say she is abandoned by her parents, but at least they leave her in a nanny’s care. That said, the episode “Paris is Burning” invites parallels to ancient Greek myth: Paris’ self-absorbed mother who can’t be bothered to attend to her daughter, her parents’ ugly and public divorce that has the whole school gossiping, and a cunning if cruel plot to redirect school gossip toward Rory.

Warriors … and whiners. Both Parises are fine warriors, but they both also struggle when faced with unexpected adversity.

Greek myth Paris agrees to fight Menelaus to the death for Helen … until he actually lays eyes on Menelaus. Did I mention he is the king of Sparta, the warrior culture of “300” fame? Seeing Paris, Menelaus “strutted,/and as a hungry lion is filled with joy/when he finds a large carcass, a wild goat or a huge stag.” Paris blanches and shrinks back into the crowd. He eventually agrees to go through with the fight, but Aphrodite just can’t bear to see him killed. She spirits Paris away in a mist. While the war rages on, Paris sulks in his room, and it takes the combined efforts of Helen and Hector to get him back on the battlefield.

Though the fate of a city wasn’t at stake, Gilmore Girls Paris did not react well to being rejected by Harvard. She had a public melt-down and then took to her bed. It wasn’t until Rory came to pick up her spirits that she consented to rejoin the mortal world.

I believe I've made a fairly strong case here. What do you think? Have I convinced you?