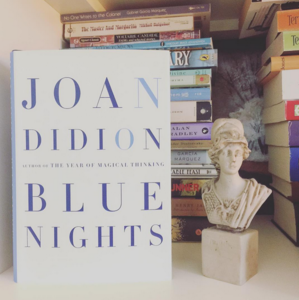 Paris: Watch Choate get Joan Didion while we're being read Eloise at the Plaza.
—
Season 3, Episode 11

About Joan Didion, I once wrote: “If I were a preteen, and Joan Didion were a boy band, she'd be the one to make me scream myself hoarse and then faint. And then sob hysterically. And then need to be sedated.”

If it seems weird that I’m quoting myself, what can I tell you? I can’t come up with a more precise analogy for what it’s like to read her. I suppose I could tell you what actually happens: I pause every few paragraphs to shake my head, chuckle, whisper, “Damn, she’s so [expletive-deleted] good.” But I still think the former gets the point across more effectively.

What you need to know about Joan Didion is that she is never talking about just one thing. She’s using one thing as a lens through which to view another thing, and she’s seeing herself seeing the things. And it’s all happening at the same time.

Take the first chapter of her memoir “Blue Nights.” It’s one sheet, front and back, all italicized, that describes the phenomenon of blue nights—a period of a few weeks from around late April to the summer solstice in June when the sky turns a deep blue at twilight. Didion writes, “Blue nights are the opposite of the dying of the brightness, but they are also its warning.” In the memoir, blue nights are the lens through which Didion explores loss and aging and herself losing and aging.

I had not yet read “Blue Nights” the first time I noticed blue nights, mostly because the book hadn’t been written yet. But the memory rushed back as I read that opening chapter.

I was walking with a friend down University Place in Manhattan. It was twilight at the end of a long day, and we were walking from the NYU “campus” to the subway at Union Square. Why I happened to glance up, why it made such an impression, I couldn’t tell you. I just remember a velvet sky, its brilliant royal blue juxtaposed against the yellowish hue of a gothic-style church’s stonework carved into the strong perpendicular lines of a tenement set behind it.

“Look at the sky!” I gasped. And we stood together in silence, contemplating.

I walked down University Place many times after, wanting to recapture that lost moment. The former by necessity; Union Square was my subway station. But I never did see that church and that tenement and that sky quite the same way again. I might have remembered Heraclitus noting “you could not step twice into the same river.” And even with static things—a street, a building, a late spring sky in New York City—imperceptible shifts within us mean we can’t retrieve what we experienced in the past.

Loss and a creeping sense of doom shadow Didion’s nonfiction. They’re everywhere in “Slouching Towards Bethlehem,” her 1968 essay collection; her preface ends with the ominous observation, “Writers are always selling somebody out” (italics in the original). I first read it during my first year of graduate school, and it has haunted me ever since.

A few years back, I heard Didion elaborate on the sentiment when she visited the Westport Country Playhouse during its staging of “The Year of Magical Thinking,” the one-woman adaptation she wrote based on her memoir of the same name. At a Symposium in conversation with Playhouse Associate Artistic Director David Kennedy, he asked what she meant by this, as he elegantly described it, “provocative” statement. Didion responded that even if writers get everything “right” about the people they write about, those people’s lives would be “just as good as or better” than if they had never been written about at all.

Sobering, no? As I think about it now, her elaboration has served primarily to paralyze me as a writer. I can’t bear the idea of making someone’s life worse. I cannot. Surely there is some other way to say the things I want to say than to involve other people at length? Or maybe she is taking things a bit too far. She does have an aura of Greek tragedy hanging about her.

If Didion’s writing were to evoke any Gilmore Girls character, maybe it would be Paris, who can be both brilliant and devastatingly hard on herself (and others). On a related note, I will insist she is named for the Trojan prince who abducts Helen in Greek myth and not for the City of Light. But to me, the two episodes that most evoke Didion don’t actually reference her (and feature Paris only tangentially, as a foil). They are “Nick & Nora/Sid & Nancy“ from season two and “Die, Jerk” from season four.

Nick & Nora/Sid & Nancy finds Rory assigned a story on the Chilton parking lot being repaved. There’s Paris trying to bore Rory off the school paper. Instead, she accepts the assignment and transforms it, in the words of the faculty advisor, “into a bittersweet piece on how everybody and everything eventually becomes obsolete.” That is pure Didion, frankly, and so is the ability to turn a seemingly mundane topic into an existential meditation.

In “Die, Jerk,” Rory learns the price of writing about other people when her scathing review causes a ballet to close early and a ballerina, who is worried about the fall-out on her career, to encourage her to “die, jerk.” To be fair, Rory did compare her to a hippo. Revealingly, Lorelai squirms reading what she terms a “harsh” review while Richard and Emily think it’s wonderful. “You eviscerated that girl,” Emily declares with delight. Richard says truthful reviews are too rare. He has a point, and not just because he and Emily were “burned” by a positive review for a restaurant that turned out to be dreadful. One wishes to be trustworthy as a reviewer.

Most likely, though, there is a middle ground for Rory to occupy, one where she can be honest without being cruel. “Balance is best in all things”—the ancient Greeks again (Alcinous to Odysseys in “The Odyssey”).

Joan Didion might call it “the willingness to accept responsibility for one’s own life.” In an essay called “On Self-Respect,” included in “Slouching Toward Bethlehem,” she writes that self-respect “is a question of recognizing that anything worth having has its price.” It is having “that sense of one’s intrinsic worth,” which “is potentially to have everything: the ability to discriminate, to love and to remain indifferent.”

One suspects Didion possesses it in abundance, despite her crippling self-doubt and long battle with depression. It’s yet another paradox in a world teeming with them, if only we could develop a tolerance for them. Like how I can’t be entirely sad reading Didion’s work because it is so very beautiful. Like how a dying star can burn so brightly we forget it is a harbinger of its demise.