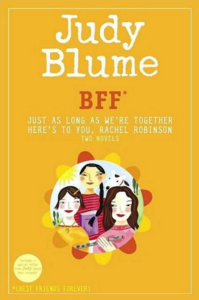 “She had a really bad teen day, and she needs someplace sympathetic to crash. Ahhh! I swear to God, if this wasn’t a major Judy Blume moment, I would kick her cute little butt out of here.”
—Season 1, Episode 9

What is a "major" Judy Blume moment? That was the question that popped into my head when Lorelai made this point to Max in the episode titled “Love & War & Snow.”

In the episode, Lane feels shut out of Rory’s life. Between attending Chilton and dating Dean, Rory seems to have less and less time and attention for her long-time bestie. Every time Lane tries to share her feelings about a boy she likes with Rory, Rory is distracted. She wants to pick up cookies for Dean from the Independence Inn. She needs to find her place in her Chemistry textbook. She needs to get to the bus stop to meet Dean. Then she and Dean need to talk about the book Rory lent him.

The situation comes to a head when Lane impulsively, and without invitation, strokes the hair of the boy she likes. Dreadfully embarrassed, she runs from the scene directly to Rory’s house, but Rory isn’t home. A snowstorm has stranded her at her grandparents’ in Hartford. The cherry on the sundae: The phone service goes out just as Lane, from Rory’s phone, is about to explain to her what happened with the boy.

Lane decides to wait at Rory’s house until she returns, which is how events lead to the above exchange. After unexpectedly running into Max in Stars Hollow and thinking the house is empty, Lorelai brings him home. Just as their steamy embrace heads for, well, you know, Lane emerges from Rory’s room. Lorelai disentangles herself to hear Lane out, then tuck her in for the night, then return to the living room to tuck Max in, on the sofa.

The episode—like the series—is about the struggle to navigate transitions in our lives. Rory has a new boyfriend and attends a new school. Lane has feelings for a boy she knows her parents would never allow her to see. Lorelai may be beginning a new relationship. And, in a separate subplot, Luke makes peace with the town’s Colonial re-enactors.

I recall having read Judy Blume growing up, but her books were not the ones I reread ad infinitum. While her books were rooted solidly in the mundane tribulations of everyday life, I, as a child, read mostly to experience adventures and new places. My favorite books, and the ones I most often reread, tended to be those that took me out of my time—Sidney Taylor’s “The All-of-A-Kind Family,” C. S. Lewis’ “The Lion, The Witch, and the Wardrobe,” Frances Hodgson Burnett’s “A Little Princess.”

The one Judy Blume book I remember loving was—this will not come as a surprise—her historical novel called “Starring Sally J. Freedman as Herself,” set in the 1940s and referred to as Blume’s most autobiographical novel. Rereading it recently, along with “Just as Long as We’re Together” and “Here’s to You, Rachel Robinson,” reminded me what a “Judy Blume moment” is: It’s a moment of realness. It’s when the world feels overwhelming, and you don’t quite know how to manage all the feelings washing over you. And you just sit with that discomfort for a minute.

Mulling over Blume’s considerable canon, I chose to read “Just as Long as We’re Together” and “Here’s to You, Rachel Robinson” because they’re companion books about two best friends whose relationship changes when they enter middle school. The first is told from the point of view of a girl called Stephanie and the second from Rachel, Stephanie’s bestie since second grade. Like Lane and Rory, Stephanie and Rachel are very different. Stephanie flies by the seat of her pants while Rachel is a driven Type A. Also like Lane and Rory, specifically in “Love & War & Snow,” diverging interests in and approaches to life threaten to drive a wedge between Stephanie and Rachel. When a new friend enters the picture, the dynamic between the two girls shifts.

Plot in Judy Blume isn’t about exciting events but the evolution of the characters and their relationships. The characters aren’t always likable. They don’t always handle situations productively. Conflict isn’t resolved, necessarily, though there may be greater clarity. The books are not overtly didactic, though we can see, from watching Blume’s characters muddle through, what’s more and less effective. The books are meant to be comforting not because everything works out perfectly in the end but because they acknowledge the messiness of real life. By reflecting it back at readers, they feel less alone.

In this sense, we might as well say “Love & War & Snow,” and the Gilmore Girls series as a whole, is one giant “Judy Blume moment.”

What do you think? Did you read Judy Blume as a kid or read her now as an adult? How do you feel about her books?