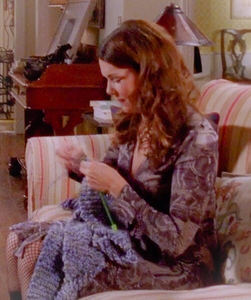 I treasure this exchange between Christopher and Lorelai. And not just because it’s a reference to a Charles Dickens novel, “A Tale of Two Cities,” that features one of my favorite scenes in all of literature.

The reference comes near the beginning of the episode called “Knit, People, Knit.” Stars Hollow holds a Knitathon to raise money to rebuild a bridge. Christopher comes downstairs one morning to find Lorelai sitting on the sofa knitting what appears to be a mile-long scarf. She thinks? Point is, she’s practicing to increase her knitting speed so she can get through as many balls of yarn as possible at Knitathon. Knitters are sponsored by balls of yarn, kind of like how runners may be sponsored by miles.

You could say the plot of “Knit, People, Knit” circles around the idea of vengeance, though not the bloodlust variety of “A Tale of Two Cities.” Marty, who’s going out with Rory’s friend Lucy, seems a little vengeful about Rory’s past rejection of him, probably prompted by his still having feelings for her. Stars Hollow as a whole is vengeful-lite about Lorelei’s surprise wedding to Christopher. It doesn’t help that he spoils their Knitathon by donating the full amount needed to rebuild the bridge, thus rendering their labor irrelevant and bringing the event to an unceremonious (and early) end. The episode concludes with Luke storming to Anna’s house, confronting her about the years he lost with their daughter (April) that he can never get back, and announcing that he will fight Anna for access to April.

But none of this has anything to do with Madame Defarge's violent hatred. Obviously. No, the reason I love the exchange I started this piece with isn’t because of its thematic resonance but its experiential resonance.

Sometimes, I’ll read something so vividly described that it takes up residence in my imagination as a still snapshot. For months after reading Yaa Gyasi’s “Homegoing,” I walked around with this image of 1920s New York in my head: an African-American woman standing with her young son in a white Upper East Side neighborhood, feeling afraid and reaching out to hold her boy’s small hand. This image was so intense it confused me. I kept thinking I had seen it in a film. Then I'd remember it was a scene from the book, crafted so viscerally that I couldn’t distinguish, in my memory, between seeing it and reading about it.

It’s awe-inspiring that words can do this, that what we read about can transform into a visual memory. That’s what I thought about watching Lorelai and Christopher’s exchange. Lorelai is no Madame Defarge. But the seriousness with which she sits with her knitting—back straight, gaze focused, fingers flying (or trying to)—yes, I can see how that image might invite Madame Defarge into one’s mental landscape. Especially because Dickens, like Gyasi, is brilliant at crafting a sensory world that subsumes the reader.

We feel like we’re there in the scene, watching it unfold. Like Scrooge with the Ghost of Christmas Past, we're visitors to a past we cannot change but strive to transform and be transformed by the act of witnessing.