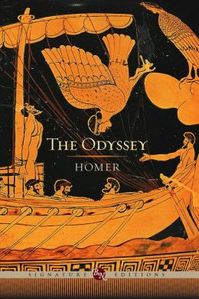 "One of the greatest inspirations for working writers is the writing of others that [sic] they admire. Walt Whitman and Homer, Dante, Shakespeare."
—Max, Season 1, Episode 11

The term "cliffhanger" may have originated from the serialization of Thomas Hardy's "A Pair of Blue Eyes”: One episode ended with a character literally hanging off a cliff. However, we can find audiences left hanging, figuratively speaking, as far back as Ancient Greece, namely in the epic poem "The Odyssey" attributed to Home (though authorship is hotly debated).

"The Odyssey" is known as Odysseus' story, and much of the plot indeed follows his toils and troubles attempting to get home to Ithaca after the Trojan War. But he doesn't appear in the story until Book 5, about 75 pages into a 400-ish page book (depending on the edition). The first four books belong to Telemachus, Odysseys' son, who goes on a mini-odyssey of his own in search of his father's fate. It’s a bit nerve-wracking, for modern readers anyway, wondering what’s happening to Odysseus and when we’re going to pick up his story.

“The Odyssey” opens in Ithaca, where Odysseys' wife, the loyal long-suffering Penelope, is besieged by an absurdly large and disruptive battalion of demanding suitors. We're talking more than 100 rowdy, trash-talking males (I'm guessing largely alpha males), for whom Penelope is obliged to provide room and board. Penelope and Telemachus are in a bind. If they persist in believing Odysseus alive, Telemachus cannot take control of the family estate, but Penelope can put off the suitors. If Odysseus is declared dead, Telemachus can assume control, but Penelope will have to pick a new husband. (Don't ask why. It'll only drive you crazy.)

Amidst the chaos and the suitors' abuse, Telemachus, aided by Athena, slips out of town to seek his father's fate. He travels to the kingdoms of two of his dad's war buddies, Nestor in Pylos and Menelaus in Sparta. Meantime, back in Ithaca, the suitors plot to kill Telemachus when he returns. Here's the last line of Book 4 in Robert Fagles' translation: "Here the Achaeans lurked in ambush for the prince." He's not hanging off a cliff, but Book 5 takes up Odysseus' story, and we don't return to Telemachus until 10 books later. Besides this overarching cliffhanger, the story overflows with moments of tension and foreboding from chapter to chapter.

If you want an object lesson in crafting suspense, you could do much worse than Homer. And judging from the reams of stories written in conversation with both "The Iliad" (which is also referenced in the Gilmore Girls series) and "The Odyssey," I’d have to agree with Max. Great writing can inspire more great writing.