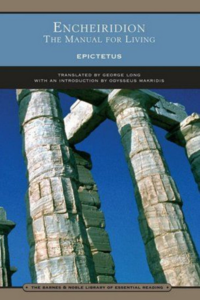 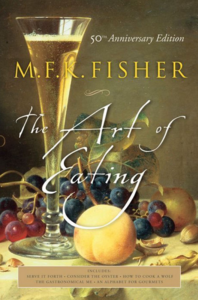 In the process of doing this challenge, I discovered the Gilmore Girls Wiki. It's a fabby Gilmore Girls resource, with summaries of every episode and lists of its film, book, and pop culture references. When I can't remember what episode a book appeared in, to the Wiki I go. Sometimes, I even stumble on titles that aren't on the list that's guiding this challenge, like "Harold and the Purple Crayon" and "Oliver Twist."

This week, I discovered another one that's not on the original list: Epictetus' "The Art of Living," was on the list of literature references in episode 17 of season one. My 2017 has turned into the Year of Reading Ancient Greece, so I was excited. I pulled out my copy of Epictetus and commenced reading. That's when I noticed a small discrepancy: Epictetus' text is called "The Manual for Living." Full title: "Enchiridion: The Manual for Living." "The Art of Living" isn't so far off the mark. It could be an alternate translation. That's what I wished for, anyway.

"The Break-Up, Part II" finds Dean and Rory, yes, broken up. He declared his love for her, and she couldn't reciprocate, especially not with words. Her inability to tell Dean she loves him ends their relationship. But she won't admit this to Lorelai, who knows there's more to the story but can't get Rory to discuss it with her. "Dean broke up with me" is all she'll say.

Whatever the break-up's cause, Lorelai wants Rory to wallow in her misery. It's part of the healing process, she says. But Rory is stoic. She wakes up before the birds and rearranges the furniture, makes a list of errands she and Lorelai have been putting off, packs away all her tangible memories of Dean. Yes, it's all very Stoic. Which happens to be the school of philosophy to which Epictetus belonged. A Greek born in Anatolia (today Turkey), he lived from around 50 - 135 AD, when Greeks were under Roman rule.

In his early life, he was a slave who ended up in Rome, where he was permitted to study and teach philosophy. One of his masters, Epaphroditus, a secretary to Nero, grew fond of Epictetus and his intellect. Eventually, Epictetus was emancipated and went on to develop his own brand of Stoicism. His "Enchiridion" is a collection of maxims for living that revolve, essentially, around calm resignation of what is. Don't wish for things to be different from what they are, he says. Wish for things to be as they are.

His maxims have their limits. For instance, it's not always entirely clear when we should resign ourselves to what is and when we should resist. But in many ways, they are profoundly therapeutic. "Men are disturbed not by the things which happen, but by the opinions about the things,' he writes. "On the occasion of every event that befalls you, remember to turn to yourself."

My dad raised me on this. "The one thing in your life that you can control," he would tell me, "is your attitude." When I've been able to act on it, which is not always, I've seen how it can change the way I experience my world and impact others. I'd like to say it's a cure-all. But it's not, of course. I hope you won't think me pessimistic if I say there's no such thing.

At the end of the episode, Rory finally breaks down. "I'm ready to wallow now," she tells Lorelai, who finds a teary Rory on the sofa in her pajamas with a tub of ice cream in her lap. Rory had returned from a Chilton party, where she sat in a plush armchair reading a book while the bacchanalia carried on around her. In this spirit of calm, rational acceptance of what is, I must tell you that the book in her hands in that scene isn't Epictetus. We first see it when she's packing her bag for the party. Rory always brings a book with her.

At first glance, and perhaps under the influence of the episode's themes, I thought it just might be "The Art of Living." But when I froze the scene on my television, and then my computer, and then my phone (yes, all three, multiple times), I had to admit that while the grainy image did seem to read "The Art of Living," the author's name had too many separate letters to be Epictetus. It's M. F. K. Fisher's "The Art of Eating," a collection of five of her earlier works that blend memoir, food, and travel writing and overflows with lush sensory descriptions. Not very Stoic, really. But it sure can feel soothing to eat ice cream while sad.

As I think about it, the two books pair perfectly for this episode ... and perhaps also for living. Don't you think?

We would love for you to join us on this challenge. To see the complete list of books, please visit The Gilmore Girls Reading Challenge. If you would like to participate, please email .