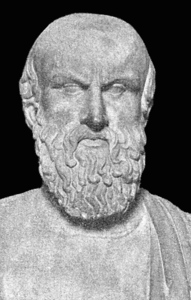 Rory: And she kept coming back to it. Comparing the archetypes to some play by Aeschylus. Oh, and you haven't lived until you've heard a typsy Brit try to pronounce Aeschylus.
—Gilmore Girls Netflix revival series, Episode 2 (“Spring”)

If I were to cull from my reading of ancient Greek literature two themes that recur across two millennia, it'd be these: 1) Pride is the worst thing ever, so just don't and 2) Try not to get on the wrong side of the gods. If you can help. But you probably can't because they're super flighty. Also? They don't like humans getting too full of themselves. Also? They can be vindictive, like chain-you-to-a-rock-for-eternity-and-have-an-eagle-eat-your-liver-on-the-daily vindictive.

Two plays I've been reading this month attributed to Aeschylus, whose work is referenced in Spring, touch on both themes: "Persians," which I'll get to shortly, and "Prometheus Bound," in which Zeus becomes very cross with Prometheus after he gives humans fire against Zeus' explicit instructions.*

The "she" referenced in Rory's quote above is Naomi Shropshire, with whom Rory, perhaps foolishly, agrees to write a biography. The project implodes. A hard-drinking narcissist, Naomi is also flighty, and vindictive, as Zeus himself. The good news: She doesn't chain Rory to a rock and have an eagle eat her liver every day. The bad news: Rory's career collapses. She blows two meetings by showing up unprepared, makes a mess of a story she's working on, and ends the episode moving back in with her mom.

As to the archetypes, I'd guess they refer to The Oresteia, Aeschylus' trilogy of tragedies about Agamemnon, his murderous wife Clytemnestra (to be fair, he did sacrifice their daughter to appease the gods), and their murderous son Orestes (to be fair, he was upset about his mother killing his father). You may also be familiar with his sister Electra, of "the Electra complex" fame.

But for me, Spring's themes resonate more with those of "Persians." Atypically, the play deals not with centuries old myths and legends but with contemporary events: The Greeks' recent defeat of the Persians, under King Xerxes, in the Battle of Salamis. "Persians" dates to 472 BC, eight years after the decisive battle in which the outnumbered Greeks improbably emerged victorious. In the play, as in the battle, the Persians invaded Greece by building a bridge across the Hellespont, the mile-wide strait that separates Asia from Europe (today known as the Dardanelles).

Whether this incurred the wrath of the gods during the battle, I'll let you decide. In the play, it's made clear bridging the Hellespont was a really ballsy move by Xerxes, exactly the kind of ballsy move that makes Zeus reach for his thunderbolts and decimate a perfectly good military. Xerxes' mother Atossa summons her husband Darius from the grave, and they discuss their fool of a son and his need to atone for his arrogance with some libations. The play is a lament for the Persians, while simultaneously noting how awesome the Greeks are for having defeated the mighty Persian military. Not that they’re bragging. Oh gods, no. They would never! (*prepares libations*)

Rory has plenty of foolish moments in Spring, quite a few of which could be fairly called products of her arrogance. She's sleeping with an old boyfriend who's engaged to someone else. She nods off while interviewing a source, sleeps with another source, and shows up to Condé Nast unprepared. She's so overconfident for her next interview that she doesn't bother doing any research. And the whole episode, she's looking for her mysteriously missing "lucky" dress.

Oh well. At least she ends the episode with her liver intact.

*Authorship of "Prometheus Bound" is contested.