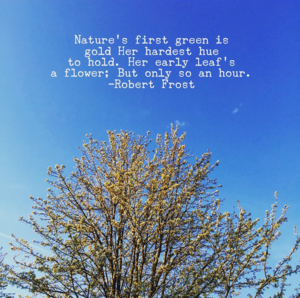 Rory: This marble is two hundred years old. Harriet Beecher Stowe walked on this marble.
Lorelai: Oh, the banister.
Rory: Was donated by Robert Frost
Lorelai: The sconce.
Rory: Was ceremoniously lit for the first time by Thomas Edison
—Season 3, Episode 22 (Those are Strings, Pinocchio)

Richard: So young lady, you're starting your second year at Yale this week.
Rory: Yeah, I move into Branford on Monday.
Richard: You're going to love Branford College. That's where I lived you know.
Rory: I know.
Richard: It's the oldest of Yale's residential colleges. They have these […] bells that are enchanting. And it has what was called by Robert Frost the most beautiful college courtyard in America.
Rory: Well, I'll tell you what, grandpa. I'll get settled in, and then we can have lunch there.
Richard: Ah, that's a deal.
—Season 5, Episode 3 (Written in the Stars)

If I could sit down with Amy Sherman-Palladino and Dan Palladino, I would ask them how mindfully they selected literary references for the series. Because the more I re-watch episodes for the Gilmore Girls reading challenge, the more the literary themes from the selected texts seem intricately interwoven with the characters’ experiences.

Take Robert Frost, for example. His name is mentioned in two episodes: “Those are Strings, Pinocchio,” in which Rory graduates from Chilton, and “Written in the Stars,” in which Rory begins a new year at Yale.

In ”Those are Strings, Pinocchio,” Frost’s connection to Chilton is fictional because Chilton is fictional. However, Frost did, early in his long and illustrious career, teach at a New England secondary school, New Hampshire’s Pinkerton Academy, from 1906-1911. As for Richard’s assertion in “Written in the Stars,” it may be that Frost declared Branford College’s courtyard “the most beautiful” in the United States.

More compelling is, of course, how Frost’s themes echo in the plot lines of the two episodes. In the first, Rory graduates from high school. The scene in which Frost figures features Rory taking a nostalgic last walk through her alma mater. In the second, Rory is about to embark on a new academic year. Meanwhile, her relationship with her mother enters a period of thaw after their disagreement over Rory and Dean’s illicit relationship. So how do these episodes’ themes of endings and beginnings, figurative death and rebirth, reflect Frost?

Prior to embarking on his teaching career, Frost famously worked his New Hampshire farm. His early poetry took inspiration from his observations of the natural world. My personal favorite Frost poem, “Nothing Gold Can Stay” (1923) tells us everything we need to know about this spinning orb and the life forms that inhabit it. In eight elegant, eloquent, heartbreaking, soul-nourishing lines:

"Nature’s first green is gold,
Her hardest hue to hold.
Her early leaf’s a flower;
But only so an hour.
Then leaf subsides to leaf.
So Eden sank to grief,
So dawn goes down to day.
Nothing gold can stay."

Then there’s his often anthologized poem “The Road Not Taken” (1916). It was written as a joke for Frost’s indecisive friend, fellow poet Edward Thomas. Well, you know what they say about jokes: They can make difficult realities more palatable. So it is with Frost’s poem, which he read to college students who, he was surprised to discover, took it quite seriously. Me too.

“The Road Not Taken” speaks to the difficulty and inevitability of making choices: “Two roads diverged in a yellow wood,/And sorry I could not travel both/And be one traveler, long I stood/And looked down one as far as I could/To where it bent in the undergrowth.” It may not be evident which is the preferred path (“Though as for that the passing there/Had worn them really about the same”). Perhaps the two roads the poem’s speaker must choose between are not as different as the speaker may wish them to be. But since only one path can be chosen (“Oh, I kept the first for another day!/Yet knowing how way leads on to way,/I doubted if I should ever come back”), the speaker clings to the idea that they’re different. “I took the road less travelled by,” the speaker concludes, “And that has made all the difference.”

Maybe I’m just a garden-variety (pun intended) literary obsessive who sees hidden meanings in everything, no matter how incidental. Or maybe everything really is connected.

What do you think?