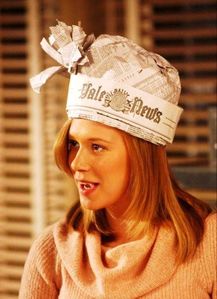 Jason: There are hundreds of great books in here ranging from the classics - Wuthering Heights - to the real classics, Valley of the Dolls.
Lorelai: Nice taste.
—Season 4, Episode 10

Emily Bronte’s Wuthering Heights makes a blink-and-you’ll-miss-it appearance in The Nanny and the Professor (i.e. season four, episode 10) as Jason gives Lorelei a tour of his amenity-laden guest room ... where he expects her to stay after they’ve, ahem, consummated their relationship. While the title itself is only referenced once, themes from Bronte’s novel are woven through the episode.

Consider other notable events in The Nanny and the Professor: Paris makes the best paper hat in the history of paper hats in between sneaking around with a much older professor at Yale, where she is A Student. Lorelei convinces Jason to keep their new relationship a secret from her parents, against his better judgment. And perhaps most disturbing of all: Richard and Emily return from Switzerland with premium marzipan for Rory and Lorelai, and they spit it into their napkins. What kind of boor dislikes marzipan?! (If you hate marzipan...I don't mean you.)

First published in 1847, Wuthering Heights also features forbidden romances, toxic secrets, and horrible choices (which are, admittedly, far more devastating that wasted marzipan, even if it is the most delectable sweet ever invented). It's about love, but not in the way we might expect in a novel that’s often referred to as a gothic romance. The story does feature moors, mood-evoking weather, and supernatural elements. But it’s not about romance, really. It’s about Heathcliff’s relentless quest for revenge and how the desire for vengeance can become an endless cycle of destruction. And that includes the destruction of the person exacting the revenge.

Heathcliff is an abandoned little boy rescued from the streets of Liverpool by Mr. Earnshaw, head of a manor called Wuthering Heights. Earnshaw brings Heathcliff home and treats him like a favored son, to the consternation of his biological son, Hindley. After Earnshaw’s death, Hindley reneges on his father’s wishes for Heathcliff. Hindley prevents Heathcliff from continuing his education and his relationship with Catherine, Hindley’s sister. In response, Heathcliff conceives an elaborate plan for revenge, and we watch that plan unfold across more than 20 years, two generations, and hundreds of pages. This isn't a spoiler so much as a warning: If you haven't read it, be prepared to stomach much emotional and physical abuse.

Love is an irrational, unconditional force and a core need of every human. It may not be able to *fix* us, but maybe it can save us from ourselves.