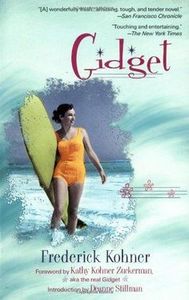 Francie - No one is denying Gidget a chance to snag Moondoggie for the clambake. - Season 3,  Episode 10

Since Amy Sherman-Palladino was born in L.A., I’m going to assume the clambake reference is an intentional error, one Francie, being from Connecticut, would make. Because, duh, clam bakes are a New England thing. Gidget wants Moondoggie to invite her to a luau.

From Francie’s comment, it’s hard to tell whether the reference is to the 1957 novel by Kohner and his daughter, Kathy, inspired by the summer she discovered surfing, or one of the many Hollywood variants the novel spawned - films plus the television series with Sally Field.

Until the Gilmore Girls reading list, I didn’t realize it was a novel at all. I’d thought it was a series of cute, fluffy shows/movies about cheerful, radiant Californians frolicking in the surf. I also didn’t realize the novel was based in reality. The edition I read was filled with pictures of a teen-aged Kathy Kohner with her surfboard.

Gidget the novel is a coming-of-age story about 15-year-old Franzie, who falls in love with surfing. The surfing community is depicted as a fringe group, populated exclusively by males in their late teens to late twenties who follow the waves and live by their wits. Wandering around Malibu one summer afternoon and entranced by the sight of the surfers riding the waves to shore, Franzie decides she must learn how to do it, even though she’s tiny and (gasp) a girl. The surfers adopt her as a sort of mascot (also, she brings them food). They even give her a nickname (all the surfers have nicknames): Gidget = girl + midget.

The genesis of her nickname gives you a sense of what can be jarring about reading the novel in 2017 - an absence of language and cultural sensitivity. In other ways, the story can feel surprisingly contemporary as it tackles issues of sexuality, drug use, and seizing independence from parental authority. Though Moondoggie and a luau do figure into the story, it’s more about Franzie’s journey, what surfing represents to her, and the struggle for identity.

In the episode when Francie references Gidget, she has pulled a student council coop. She calls a supplementary meeting that she knows president Paris will miss so she can push through her prom agenda without Paris’ interference. Rory confronts her, and Francie downplays it with the Gidget reference. It seems like a throwaway line, but in a deeper sense, it feels fitting. In the episode, we see a new side of Paris. She is unfocused in class and lax about meetings because she’s besotted with her new boyfriend. Similarly, the Gidget of the novel shows us another side of the story of the girl surfer.