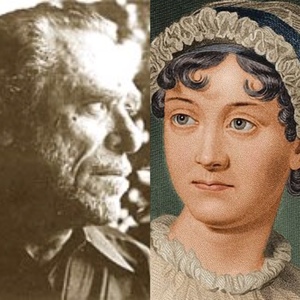 Jess – Yeah, and I think she would’ve liked Bukowski.

If you're a hardcore, I’ve-seen-every-episode-approximately-12-times Gilmore Girls fan, you might remember the scene quoted above from season two. Jess and Paris invade Rory’s “alone” night while Lorelei is out of town, and the three teens end up gorging on diner food together. But the big surprise is that Paris and Jess get along. Sort of. In their own twisted way.

Before Jess put it out there, I wouldn't have thought to put constrained Jane Austen in the same sentence as debauched Charles Bukowski. And yet ... the more I think about it, the more I can see it. Since the episode references the authors rather than their specific works, I'm drawing on what I've read by each most recently: On Cats by Bukowski and Pride and Prejudice and Northanger Abbey by Austen.

The most obvious similarity is humor. Both Bukowski and Austen like a laugh. Pride and Prejudice's Elizabeth says, essentially, she wouldn't want to live in a world without laughter (I can’t argue with that) and spends her time poking fun at people and situations (like her dad, she overdoes this). Austen’s sassy wit is also on full display in Northanger Abbey. One of my favorite scenes features the narrator going off on people who don’t appreciate novels:

“Oh! it is only a novel!” replies the young lady, while she lays down her book with affected indifference, or momentary shame. - “It is only Cecilia, or Camilla, or Belinda”, or, in short, only some work in which the greatest powers of the mind are displayed, in which the most thorough knowledge of human nature, the happiest delineation of its varieties, the liveliest effusions of wit and humor are conveyed to the world in the best chosen language.

Ha. That is so meta.

Both Bukowski and Austen also employ self-deprecating humor in particular. On Cats overflows with it, which is a large part of what makes the pieces so poignant. My favorite poem in the collection, called “a reader,” begins, “my cat sh*t in my archives.” The kicker is, Bukowski’s cat didn’t poop in any old box of poems. These were destined for a university’s archives. Le sigh.

There are no pooping cats in Austen, that I can recall, but Pride and Prejudice features poignant, humorous moments grounded in self-deprecation. Mr. Bennett mocks his inability to take anything seriously for long enough (which is a real problem, actually). Elizabeth jokes that she first thought well of Darcy when she toured his magnificent estate. (At least … we think she was kidding, mostly.)

Juxtapositions also play into both Bukowski and Austen’s works as well. With Bukowski, it's the sublime pushing against his vulgarity. For example, a long meandering piece that meditates on the majestic nature of cats is followed by the above mentioned poem about his cat pooping on his archives. With Austen, it's the public and private/appearance and reality divides that play counterpoint. What happens in private spaces can be spontaneous, intimate, confessional, while public spaces are governed by strict ritual and propriety.

Both authors can be subversive, in their discrete ways. Bukowski, through his subject matter and language, obviously challenges conventions more overtly than Austen. He seems to delight in mucking things up. In Austen’s world, you can only spit in the face of convention so much before there are Consequences. Still, her stories have their moments. For instance, Pride and Prejudice brings together characters who, in the real world of Regency England, might have a slightly better chance than a snowball’s in hell of marrying for love.

So who know? Perhaps Austen would have appreciated Bukowski, once she got past her shock. Now I think about it, it’s a little bit like Paris and Jess, who seem so different on the outside but have, upon closer inspection, more in common than we might have thought.