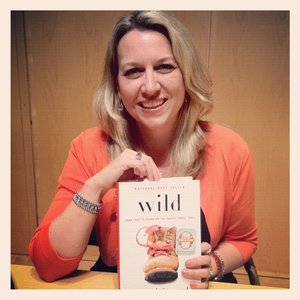 Last week’s Gilmore Girls reboot on Netflix grew our challenge reading list by quite a few titles! This isn’t really a surprise, though, given the prominence of books and authors in the series.

One book that featured prominently is Wild: From Lost to Found on the Pacific Crest Trail by Cheryl Strayed. The memoir figured into the plots of Summer and Fall as more than just a passing reference. I won’t reveal exactly how in case some of you haven’t watched it yet. Let’s just leave it at this: It plays a significant role in how Lorelei’s story unfolds as the series winds down.

Wild tells the story of Strayed’s three-month solo hike along the Pacific Crest trail, which she undertook alone, at the age of 26, having lost her mother, her marriage, and her equilibrium.

I heard Strayed speak about the book at the Wilton Library in 2012, when she had two bestselling books, Wild and Tiny Beautiful Things, and was on book tour for both. It was a lively, engaging talk that touched on what made Wild such a hit. One reason is its raw honesty. Another is how eloquently the literal and figurative are interwoven in her story. When, for example, she first stumbled on a book about the Pacific Crest Trail, she was waiting on line to buy a shovel (there had been a snow storm). At that moment, she was also “in a hole” in an existential sense. When she found herself trying to figure out how to bear an entirely too heavy backpack before embarking on her hike, she was also at a point in her life when she was trying to figure out “how to bear the unbearable.”

At the talk I attended, attendees shared their own stories of loss and of attempted transformation. One woman said of her experience reading the book, “It felt great that I wasn’t alone.” The Gilmore Girls episode riffs on this in an amusing way.

I’m not one to retreat into nature for solace or reflection. When I feel disconnected, lost, or anxious, I turn to artifacts, often the kind that are printed on paper and bound between pretty covers but also the kind that are housed in museums or that are monuments in themselves. Human creations and labors of the human imagination reveal truths about universal experiences that I find comforting and grounding. Reading Wild didn’t change that for me. It didn’t make me wish I were the kind of person who would hike 1,100 miles largely alone for three months, or even three days. But the book expresses one of the most incisive definitions of suffering I can remember coming across in a memoir: We suffer when we want things to be different from what they are.

Wild, and the Gilmore Girls series, explores how to come to terms with this in a productive way. Even if, like me, you’re not one to solve your problems by immersing yourself in nature, reading Wild can be a inspiring and transformative experience.

Photo of Cheryl Strayed from her 2012 at Wilton Library, courtesy of yours truly