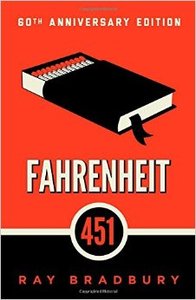 Though only 63 years have gone since Bradbury penned his dystopian novel, it’s known as a classic. Perhaps this is an indication of how rapidly our world has changed since 1953, when the book was written. The year may seen as alien, in its way of life, as 1853. Perhaps, then, its classic status is a sign of the novel’s timelessness, which can make novelists seem like prophets who write as much about our own era as theirs.

The narrative follows the transformation of Guy Montag, a "fireman" of the future. His job isn’t to put fires out but to start them, by gathering and burning books, whose existence is seen as a threat to the security of the state and the peace of mind of its citizens. “We must all be alike,” Montag’s fire chief, Beatty, tells him. “Not everyone born free and equal, as the Constitution says, but everyone made equal. Each man the image of the other; then all are happy […]. A book is a loaded gun in the house next door. […] Who knows who might be the target of a well-read man?” Life gets messy, complicated, unpredictable, uncontrollable when people think for themselves.

In Montag’s dystopian future, technology has become a giant pacifier, mind-number, and mechanism for groupthink. This is to say, the novel prophesies the constant noise and filler of our contemporary world, along with the isolation and loneliness that virtual connection and communication invite. It predicts us in other alarming ways as well: our obsessions with speed, convenience, and disposability.

In the midst of Montag’s awakening, sparked (pun intended) by watching a woman burn with her books instead of leaving them behind, he is visited by Beatty, who warns him, “What traitors books can be! you think they’re backing you up, and they turn on you.” The allegorical plot – coming just 20 years after the Nazi book burnings and during the McCarthy era – reflects, on one very important level, on the power of ideas and dissenting, nonconforming voices. It also explores ambiguity and complexity, why we fear them and why we need them.

As bleak and grotesque as is the world Montag inhabits, it’s not without hope. Dissenters stationed outside the city carry on the work of remembering. They memorize books and pass the knowledge on. And they provide this dawning ray to look to: “That’s the wonderful thing about man; he never gets so discouraged or disgusted that he gives up doing it all over again, because he knows very well it is important and worth the doing.”

Let us hope it ever remains so.