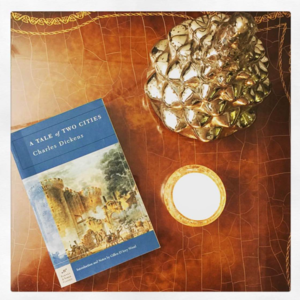 I don’t want to tell you what to do, but … I think you should drop whatever you’re doing right now and read A Tale of Two Cities by Charles Dickens. Wait, not yet. Read this first.

Dickens’ classic makes an early appearance in the Gilmore Girls series: It’s in the very first episode (not the pilot) on Rory’s very first day at Chilton. Her English teacher cites it, along with several other hefty Dickens tomes, as a major influence on Tolstoy. “’Great Expectations,’ ‘A Tale of Two Cities,’ ‘Little Dorrit,’ – All major influences on Leo Tolstoy,” he says. These references are meant to show that schoolwork will be challenging at Chilton.

Dickens can definitely be challenging, but that’s not why I’m recommending you read him, A Tale of Two Cities specifically. I’m recommending the book because I happen to think it’s an excellent novel to read right now.

Dickens shows the brutality and inhumanity of the revolution, but he also shows how the aristocracy’s horrific behavior sowed the seeds for it. The aristocracy failed to honor the humanity of the “lower” classes and, in that way, chipped away at their capacity for human empathy. When the aristocracy falls to them, their rage and desire for vengeance fuels a grotesque bloodlust that transforms victim into victimizer. Dickens writes, “Crush humanity out of shape once more, under similar hammers, and it will twist itself into the same tortured forms. Sow the same seed of rapacious license and oppression over again, and it will surely yield the same fruit according to its kind.”

The novel also shows, through public obsession with a trial that takes place in London, how our love of drama can devolve to render us grotesque:“The sort of interest with which this man was stared and breathed at, was not a sort that elevated humanity. […] Whatever gloss the various spectators put upon the interest, according to their several arts and powers of self-deceit, the interest was, at the root of it, Ogreish.”

It’s not all ugliness, though. Intertwined with these narratives is a more personal one about the power of sacrificial love. It explores how, even though we can’t entirely overcome our flawed natures, sometimes, for a brief moment, we can transcend them. And if it happens at just the right moment, it can be profound.

A Tale of Two Cities doesn’t have as much humor as some of his other books. It’s heavy, emotionally more than literally: At around 300 pages, depending on the edition, it’s practically a short story, for Dickens. But it’s as timely as any novel written 157 years ago can hope to be.