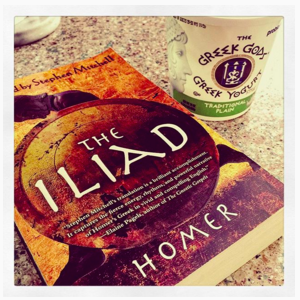 “She forgot to return a library book once. And she was so guilty about it that she grounded herself. I mean, can you imagine? She's just sitting there in her bedroom yelling at me, 'Now no one else got to read The Iliad this week because of me!'" – Lorelai, Gilmore Girls Season 5, Episode 22

I can see why Rory would feel a little guilty: Though it’s one of the saddest books I’ve ever read, “The Iliad” is also an absolute must read for anyone seeking deeper insight into the human condition.

This epic poem, which has come down to us from around the eighth century B.C., takes place during a few weeks in the Trojan War’s tenth year. “The Iliad” begins with Greek leader Agamemnon having to return his “prize,” Apollo’s daughter Chryseis, to avoid a plague. To compensate himself, Agamemnon appropriates Briseis, the woman who had been awarded to Achilles. Furious Achilles then retreats to his camp with his Myrmidons and refuses to fight alongside the Greeks. Meanwhile, the gods, who have their own favorites, scheme, whine, and pout on Mount Olympus, and the Trojans scramble to figure out how to escape their fate.

For my recent reread, I chose Stephen Mitchell’s 2011 translation, which The Wall Street Journal called “daring” and The Sunday Telegraph described as “well-forged and clean-limbed.” Both are right on point. The “powerful simplicity” (The Sunday Telegraph again) of Mitchell’s prose shrinks the distance between reader and text in that the language feels very modern. The contemporary language then foregrounds how foreign the ancient world described in the poem feels. But this feeling is somewhat deceptive, illusory.

Besides the horrifying exchange of women as prizes, the most obvious way the world of the poem feels distant is on the battlefield, where warriors wrapped in armor engage in hand-to-hand combat and skewer each other with spears. The battlefield deaths are gruesome, detailed, and described somewhat dispassionately. This matter-of-factness casts into relief the bald brutality of war and violence, especially because it’s juxtaposed, as in Leo Tolstoy’s “War and Peace” and Ernest Hemingway’s “A Farewell to Arms,” with cozy domestic scenes. Hector and Andromache cuddle their baby boy aware that the child will likely grow up without his father. A solder’s untimely death means he will never make it home “to pay/the debt that he owed his dear parents for bringing him up.” In other words, this is every war ever fought.

Alongside the testosterone-fueled violence is loads of creative trash talking. Typically, it’s exchanged between Trojan and Greek, but it also happens among allies. Here is Achilles talking smack with his bestie, Patroclus:

‘Why are you crying, Patroclus, like some little girl

to be comforted and gets in her way and keeps

crying until the mother at last picks her up?’

One of the reasons I love this example is that it contains a timeless image that any human being reading it, at any point in history, can picture in his or her mind’s eye. When I read this, I actually visualized specific times I’ve seen this happen (though not just with little girls, Achilles!). Of course, we don’t need full-out war to hear trash talking these days.

Now let’s talk about the part that may seem most distant to a modern reader: the absence of human agency. Juxtaposed against the brutality of war are the gods “at ease/in their beautiful houses,” kicking around ideas about how to mess with the puny mortals and heroes. The gods bicker and pout when they don’t get their way about letting this one or that one either suffer or survive. They scheme about how to get around Zeus’s edicts concerning who lives and who dies. But even Zeus himself can’t get exactly what he wants, as Hera reminds him that he’s not allowed to change what has been ordained.

This is, ultimately, where “The Iliad” feels most deceptively alien: In the story, victory is not earned by mortals but granted by gods or bestowed by fate. Sure, gods and mortals have some options. Zeus can kill Patroclus sooner (and save others from dying) or later (and “increase the sorrow of even more men”). Achilles can choose to die on the battlefield and achieve glory by being immortalized in poetic verse, or he can sacrifice glory and instead choose a long, peaceful life.

Basically, desirable options are thin on the ground in this story. “Having choices” does not mean getting everything one wants or exactly what one wants. Options are limited, and each has its downsides. This is, once again, where the story isn’t as different from our contemporary lives as we may wish to believe. As much as we may not like it, there are forces at work in the universe that are immune to human will. None of us is at liberty to choose from an endless array of options. We cannot, for example, choose never to die.

This, finally, is what makes “The Iliad” so sad and so important to read: It is paradoxical, a beautiful epic poem that exists to tell a story of destruction, suffering, and inescapable fate. It may seem unsettling to modern readers, but isn’t this the essence of human experience? The unfortunate truth is that we all share an inescapable fate. This is what the ancient Greeks understood and expressed so well: Nothing can be perfect. We cannot have it all. But we can cheat the gods and our fate by creating beauty.