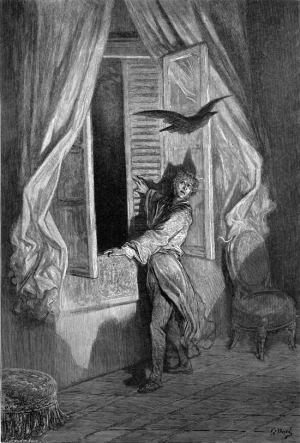 With Halloween upon us, my Gilmore Girl reads this week are holiday themed: Edgar Allan Poe’s poem “The Raven” and his chilling short story “The Tell-Tale Heart.” Both appear in the Season 3 episode entitled “A Tale of Poes and Fire.”

Though the episode first aired in April (as opposed to the witching month), it revolves around an Edgar Allan Poe convention held at the Independence Inn. As Lorelai checks in two guests, she tells them, “Let me assure you, there are no human body parts buried in the floor of your room to keep you awake tonight.” This reference to “The Tell-Tale Heart” is lost on the couple, however, as (Lorelai later learns) they are not actually part of the convention. Ha!

The story is a staple on school curricula. I myself first read (and was haunted by) it in high school. I’ve never quite shaken it, really, and it does not get old with age. Rereading it left me shuddering all over again. It’s narrated in the first person by a man who insists he is sane despite having carefully planned and executed a gruesome murder and stuffed his dismembered victim’s remains below the floorboards. A concerned neighbor, who heard the victim scream, reports the man, and … well, I’ll leave the rest to you.

Madness is also a theme in “The Raven,” Poe’s narrative poem about a man mourning a lost love and his encounter with a raven who answers the man’s every question with an enigmatic “Nevermore.” I rather think that would drive me mad too, eh? The poem was, interestingly enough, inspired in part by Charles Dickens’s novel “Barnaby Rudge,” which features a talking raven called Grip.

Ah, this poem is a magnificent feat. It has such energy and musicality and pulls you along like an irresistible current. Here is one stanza for sampling:

And the silken, sad, uncertain rustling of each purple curtain

Thrilled me—filled me with fantastic terrors never felt before;

So that now, to still the beating of my heart, I stood repeating,

"‘Tis some visitor entreating entrance at my chamber door—

Some late visitor entreating entrance at my chamber door;—

This it is and nothing more.”

“A Tale of Poes and Fire” may evoke strong feelings in “The Raven” fans: It features a recitation of the poem, during which Lorelai and Rory discuss the merits of Yale vs. Harvard. Between debating whether Yale’s excellent drama program should be a factor in which school Rory chooses to attend, they "listen" to the recitation, which apparently continues too long for the Stars Hollow’s residents in the audience.

Lorelai: I don’t remember ‘The Raven’ being this long.

Rory: It could have used some editing.

Luke: Hey, how long is this thing?

Lorelai: He’s got at least five ‘nevermores’ to go.

Miss Patty: Hey, how many ‘nevermores’ do you think he’s got to go?

Miss Patty: Poor Edgar Allan Poe has suffered so much. And now we gotta suffer along with him.

Hmmm, I’m not so sure I agree with the gang on this one. I could listen to that poem all day long … or at least for the length of a reading or two. Incidentally, it turns out to be two in Stars Hollow that night: Just as the first Poe concludes his reading, a second Poe stands up for a second round. I’d stick around for that…

Photo is of an 1884 illustration by Paul Gustave