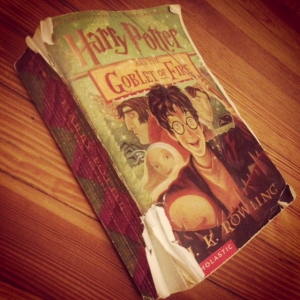 “Walk smooth. That's the new Harry Potter on your heads. If they should drop, Harry will die and there won't be any more books.” – Miss Patty to her students, Gilmore Girls season 1, episode 2

To provide a little context for the above quote, when Miss Patty utters it to her young students, she’s leaning against the door of her converted barn studio, puffing on a cigarette. It’s a sort of throwaway line we overhear as we follow Lorelai and Rory on their stroll through Star’s Hollow, our introduction to one of the quirky characters we’ll get to know over the series’s seven-year run.

As you may have noticed, Miss Patty doesn’t actually reference “Goblet of Fire.” She simply says “the new Harry Potter book.” Since “Goblet of Fire” was published in 2000, the same year the first season ran, it’s the title that made it onto the Gilmore Girls reading list.

I wonder how much the scriptwriters knew about the novel when they penned that line for Miss Patty. Granted, Harry doesn’t die in the novel (not really a spoiler since it’s only the fourth of seven books). But it’s in “Goblet of Fire” that the series turns towards more sinister and serious events. In the novel’s first chapter, we learn that Voldemort has concocted a plot against Harry. So when his name is entered to compete in a dangerous tournament, via the eponymous goblet of fire, we know that his life is in danger on two levels – the known level (the tournament) and the unknown one (the mysterious plot disclosed in the book’s first chapter). The narrative builds to answer the question, how are these two dangerous scenarios connected?

Like all the Harry Potter novels, it’s a well-paced page-turner filled with moments of both levity and trauma and teeming with insights into the human condition, not to mention loads of good advice. Here are five that especially resonated with me during my most recent reread:

On tragedy as entertainment. News reports, books, movies, and plenty of reality shows thrive on the premise that tragedy fascinates humans and that we are, to some extent, attracted to what is dark and transgressive. During a lesson, Harry and his classmates watch their professor demonstrate three “unforgivable” curses, with many of the students becoming so transfixed by the process that they seem to forget the purpose – to illustrate why these curses are unforgivable. Not Harry, though:

“They were talking about the lesson, Harry thought, as though it had been some sort of spectacular show, but he hadn’t found it very entertaining.”

I love how Harry’s response provides a reminder to treat others’s experiences, especially traumatic ones, with respect and empathy, not as entertainment.

On popularity. In the novel, we discover a secret that Hagrid has been hiding about himself. When it's exposed, he feels humiliated and ashamed and tries to resign from Hogwarts. Dumbledore points out that he has received from parents countless letters of support for the teacher, but Hagrid only seems able to focus on the negative responses. Does that sound familiar to anyone? Dumbledore’s response is perfect:

“’Really, Hagrid, if you are holding out for universal popularity, I’m afraid you will be in this cabin for a very long time,’ said Dumbledore, now peering sternly over his half-moon spectacles.”

In other words, instead of obsessing over the haters, focus on the people who support and believe in you.

On taking the measure of a human: In a discussion between Harry and his godfather, Sirius, about a Ministry official who is seen being abusive to his house elf (essentially slaves in the wizarding world), Sirius makes this statement:

“’If you want to know what a man’s like, take a good look at how he treats his inferiors, not his equals.’”

Apply “inferiors” in this context to any unequal power relationship, and it’s a fitting indictment.

On worrying. It can so very hard not to perseverate on shadowy fears of what will come, but Hagrid knows what’s what.

On power and choice. In a sense, the whole Harry Potter series is (among other things) an exploration of the relationship between power and evil. Even characters who believe they are on the “right” side make wrong decisions to maintain their power, including, in “Goblet of Fire,” Minister of Magic Cornelius Fudge, who refuses to acknowledge a difficult truth, one that would force him to make potentially unpopular decisions. The consequence is that he also fails to take the steps necessary to protect the citizens to whom he is responsible. Fudge makes another mistake, as do characters on both sides: He judges by class rather than behavior, assuming the primacy of those of a particular caste and heritage.

“’You are blinded,’ said Dumbledore, his voice rising now, the aura of power around him palpable, his eyes blazing once more, ‘by the love of the office you hold, Cornelius! You place too much importance, and always have done, on the so-called purity of blood! You fail to recognize that it matters not what someone is born, but what they grow to be!

Dumbledore’s last sentence speaks to my favorite theme in the book (and the series): That your power and possibility lie first and foremost in your choices. This can be more difficult than believing in an indifferent, externally bestowed fate because it means we have to work to achieve the outcomes we desire. Yet our choices are the only things we can control, and in the series as, I believe, in life, they make all the difference.