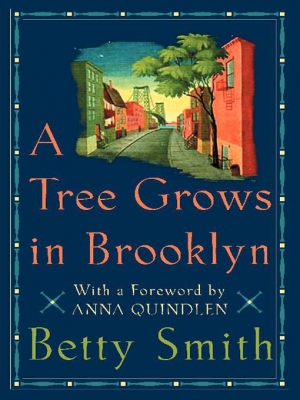 My mother and I don’t often share books. She is usually engrossed in a who-dun-it mystery, while I tend to gravitate towards character driven fiction. While I’m sure she must have recommended more than one book to me in my lifetime, I can only remember one. When I was in middle school, about Francie’s age at the beginning of the novel, my mother told me that “A Tree Grows in Brooklyn” was one of her favorite books when she was a child. She assured me that I would enjoy the story of a young girl growing up poor in Williamsburg in the early twentieth century. As a 12-year-old girl is programmed to do, I ignored my mother’s recommendation. Many years later, after I purchased the book on a whim, it promptly nestled itself into a comfortable spot on my bookshelf to collect dust. Another decade later, as I scanned the titles in the Gilmore Girls challenge, "A Tree Grows in Brooklyn" once again caught my eye.

Nearly 30 years after my mother mentioned this book, the time had come to read it.

On Sept. 3, a few days after I started reading the book, I happened to notice an article in the New York Times by Tatiana Schlossberg entitled "New York Today: Last Call for Summer." Following a list of various tree species found in the five boroughs, Schlossberg closed the article with a description of the Tree of Heaven, the tenacious species growing outside Francie’s apartment window. It certainly seemed like a sign. How often does a New York Times article highlight a 70-year-old novel?

Many who write about this novel offer the tree’s ability to lay down roots in the hard cement as a symbol for Francie’s struggle to flourish despite her family’s hardships. But what struck me most was Smith’s facility with description - of people and, even more effectively, of places. The reader is transported to the Williamsburg of 1912-1918. I could clearly picture the prize board at Cheap Charlie’s penny candy store and Flossie Gaddis’ elaborately decorated costumes. I could smell the sour rye bread fresh from the bakery oven and dark coffee with condensed mild. I could taste the sour dill pickle plucked from the barrel and Mama’s fragrant cinnamon bread pudding. The sights and smells and sounds of Brooklyn came to life under Smith’s accomplished pen.

Brooklyn is Francie’s trusted friend and the most developed character in the novel. Though she and her family struggle daily to make ends meet - her mother working as a janitor and her father, when he was sober enough to work, vying for jobs as a singing waiter - Francie feels at home in Brooklyn. She is familiar with the local stores and neighborhood characters. She knows when Mr. Tomony will arrive home from his Saturday night jaunts to Manhattan and where to find the bowl of seasonal flowers at her local public library.

Sometimes Francie does feel the need to get away from the difficulties of her daily existence, to forget about her hunger pangs and loneliness, and reading is her means of escape. Since her children were small, Francie's mother had insisted that Francie and her brother, Neeley, read a page of the Bible and a page of Shakespeare every night. When Francie learns to read independently, she feels like a whole new world has unfurled before her:

“From that time on, the world was hers for the reading. She would never be lonely again, never miss the lack of intimate friends. Books became her friends and there was one for every mood…On that day when she first knew she could read, she made a vow to read one book a day as long as she lived.”

At the age of 14, after the death of her father, Francie gets a job in Manhattan to help support her family. When Francie takes the train over the Williamsburg bridge for the first time, she is disappointed to leave Brooklyn behind, unsure of herself in this new unfamiliar place:

“The Bridge had been the first disappointment. Looking at it from the roof of her house, she had thought that crossing it would feel like a gossamer-winged fairy flying through the air. But the actual ride over the Bridge was no different than the ride above the Brooklyn streets…There was no different feeling about the train as it went over the Bridge. New York was disappointing.”

At the end of the novel, Francie makes the difficult decision to leave her beloved city to attend The University of Michigan. A few days before her departure, she notices a little girl sitting on a fire escape with a book in her lap. The little girl’s name is Florry Wendy, but Francie chooses to refer to her by her own name, bidding goodbye to herself as she moves on to a new chapter of her life.

She closes the window.

Though Brooklyn would live on as a cherished friend in Francie’s memory, there would always be new children to keep the city company once she was gone.

We would love for you to join us on this challenge. To see the complete list of books, please visit The Gilmore Girls Reading Challenge. If you would like to participate, please email   This email address is being protected from spambots. You need JavaScript enabled to view it. .