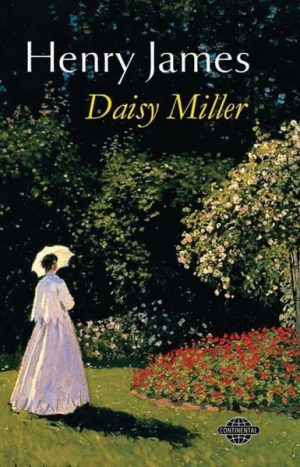 “So, what is this, a Henry James novel? The young lady acts up, and her family ships her off to Europe?” – Rory, Gilmore Girls season 5, episode 1

A staple on high school English class syllabi, “Daisy Miller” is the 1878 novella by Henry James, the American-born author who spent much of his life in England. It recounts the tragic story of the eponymous American heiress who does what she wants when she wants to, and pays the ultimate price for it.

Though narrated in the third person, the story is told from American expat Frederick Winterbourne’s point of view. Winterbourne first meets Daisy in Switzerland, where he is “studying” (apparently, this is code for macking on a lady friend) and she is on a European tour with her mother and younger brother.

When Winterbourne first meets Daisy in her hotel’s garden, she chats away with him, exhibiting no evidence of guile (or, in contemporary terms, game), unless her seeming lack of guile is a kind of guile in itself. This is what Winterbourne ponders throughout the story: What’s Daisy playing at? Is she an uncouth innocent, or is she a disreputable such-and-such? And, hang on, can Winterbourne’s point of view even be trusted?

During Daisy's first conversation with him, she mentions that she wants to visit a nearby castle but has no one to go with her. This is Winterbourne’s cue to offer himself as escort. According to Society, Daisy should decline because she barely knows him, and proper ladies don’t go galavanting around castles with strange men. Winterbourne doesn’t want her to say no, because she’s pretty, but he also knows she should say no, what with Society and all. Since Daisy doesn’t want to say no, she accepts Winterbourne’s offer.

At this point, the head of the 21st century reader (or even the late 20th century reader, which I was the first time I read this novella) may be in legitimate danger of exploding. One imagines it was this kind of double standard that provoked British suffragettes to do things like throw themselves under horses.

Throughout the story, Daisy seems puzzled and mildly saddened that Society shuns her, but she’s not chastened. Despite repeated censure, she will not conform to Society’s standards. All the while, Winterbourne is like, Is Daisy just “an American flirt”? Is she disreputable? Have I been in Europe too long to be able to assess her accurately? He just can’t make up his mind, and when he finally does, he gets it all wrong.

On one level, it seems like an early feminist story, but I suspect it’s less so than it appears to the modern reader. Daisy actually is an innocent who either doesn’t understand why Society rejects her or isn’t interested in understanding. It’s precisely because her excursions with male admirers are so benign that she can’t or won’t accept European Society’s frowning on them. Confident that her behavior is sound, Daisy isn’t concerned with appearances.

In this sense, the story seems less about the rights of women than about a clash between cultures, between classes, and between the old world and the new. Daisy is a nouveau riche heiress from Schenectady, NY with money enough to buy the right clothes. But she lacks pedigree and the pretension of American expats who mould themselves to fit European standards. An exuberant, resourceful American, if Daisy can’t get her mother or brother to take her to the castle, why, then she’ll find someone else. The important thing, you see, is that the thing gets done. Except this isn’t the case on the continent, where appearances actually do matter, sometimes perhaps more than actual behavior.

Gorgeously written, fascinating, provocative, maddening, “Daisy Miller” is a fitting read in the context of Gilmore Girls. Lorelai flees her parents’s suffocating, highly regimented upper-class life in favor of Stars Hollow’s warm, accepting embrace. On one hand, it might seem surprising that it’s Rory who utters the above quoted line. But on the other, one rather doubts that Lorelai would allow herself to be shipped off anywhere.

If you haven’t read this story, give it a look and tell us what you think the takeaway of the ghastly ending is!