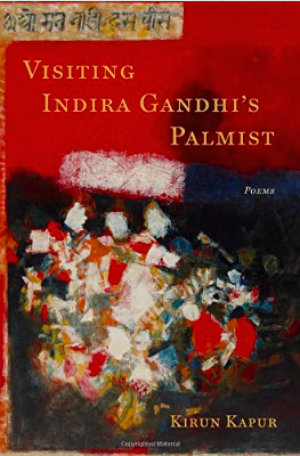 The variety of poetic forms is a testament to Kapur’s talent and versatility. While some poems employ regular stanza breaks, rhyme, and repetition, others are more loosely fashioned, and some are prosey. Most fascinating is Kapur’s ability to weave eastern and western cultures and religious traditions. She references Biblical brothers Cain and Abel alongside Arjuna, hero of The Bhagavad Gita. In other poems, details recognizable to American readers bridge cultural gaps, while a short “Notes” section provides context with further information about the incarceration of Mohandas K. Gandhi, the Partition of India, and Indira Gandhi’s assassination. In “I Ask My Mother How It Happened,” the narrator’s mother explains the Partition - during which between 75,000 and 100,000 women were abducted - in terms of craving a Chips Ahoy cookie. “That’s how it happens. /The sun pours in, the birds are taking their grievances from tree to tree and /the sweet, dark smell intensifies...Because of desire. It’s all our wanting that /makes the world so sad.”

Kapur can also bring characters to life without explaining them away. In one poem titled after a phrase attributed to Augustine of Hippo, she describes the narrator’s mother as a woman who knows, “...the exact number of steps between /her bed and the landing, the landing /and the front door; whether there was milk /or ice or aspirin; when to spend /two nights with the neighbors…” Most endearing is Kapur’s literary devotion to mangoes, eaten by the narrator’s father and at times bruised and fallen. She writes, “And the pit is the shape of my eye, seeing /Being the hard center of life.” The reader is inspired to take a bite.

BI: What is the first book you remember loving?

KK: Mother Goose. We had an oversized copy with a golden spine. I had to struggle to hold it up with both hands.  Inside was a series of surreal pictures—talking pigs, ladies in odd hats, dishes with faces and sprinting spoons. It had words like “tuffet” and “jiggetty,” which couldn’t be heard anywhere else in my world. I think I was as much afraid of it as I was in love with it, but the strangeness and the music brought me back again and again.

BI: What is a book that inspired you to be a writer?

KK: If anything inspired me to be a writer it was my father. He was (and is) a great storyteller. Every night, the whole family would pile into my parents’ bed to listen. He told us about his childhood in India, but he made up stories, too. He had his own version of Curious George, which featured a jet-setting monkey who was constantly embroiled in international incidents. This monkey lit Fidel Castro’s beard on fire and mixed it up with oil-owning sheiks in Abu Dhabi. Listening to a much-loved voice in the dark is still one my favorite experiences in the world.

BI: What was the first thing you remember writing?

KK: A poem about the rain. I’d been left at my grandmother’s house, while my parents went on some mysterious grown-up errand. I was bored and had already been in trouble for digging around in the closets. I don’t remember much about the poem, but I remember the sound of the rain on the roof and the fact that I had to sit up on my knees to see the paper.

BI: What book did you read in school that you did not fully appreciate until later?

KK: I was a terrible nerd. With the exception of chemistry textbooks, I liked pretty much everything I read in school.

BI: What book would you make required reading in school?

KK: Oh, this is an impossible question!  I could give you a different answer to this question everyday for the rest of my life. Today I’ll say, “Autobiography of Red,” by Anne Carson.  It’s a love story and an art story and an understanding your weird self story. Every line is smart and surprising.

KK: I recently finished reading Jamaal May’s wonderful first book of poems, “Hum.”It’s full of bolts and bricks, love and machinery and lightening. Read it for its music and muscle.

BI: What would you call a "great American novel"?

KK: Since I’m not a novelist, here are a few (idiosyncratically chosen) “great American poems”:

Hart Crane’s “The Bridge.” I think of lines from this poem all the time.

Robert Pinsky’s “An Explanation of America,” or his “Gulf Music.” Both are brilliant.

For more information about Kirun Kapur and her work, visit kirunkapur.com.