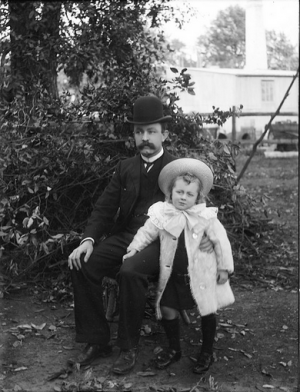 My father has given me many gifts, among them my love of reading (and the New York football Giants). As a child, I’d sometimes ride the train with him to his office in lower Manhattan, and we’d spend the trip each absorbed in a book that we’d discuss at home in the evenings. When I was 16, he introduced me to “Pride and Prejudice.” As an adult, I introduced him to Joan Didion’s nonfiction.

So of course with Father’s Day coming up, I’m thinking about books and dads. Because my father is largely responsible for cultivating my love of reading, I thought I’d dedicate today to books that feature memorable literary daddies. As always, I’d love to hear your choices in the comments!

Captain Snegiryov in “The Brothers Karamazov” by Fyodor Dostoyevsky

First of all: the award-winning translation by Richard Pevear and Larissa Volokhonsky. A friend and I decided to read “The Brothers Karamazov” in graduate school just because neither of us had read it before, and we would have given up had we not discovered their translation.

The novel actually has a number of memorable fathers. Fyodor Karamazov, the patriarch of the titular Karamazov family, is memorable for being kind of a nightmare dad. Then there’s Father Zosima, the Orthodox priest who is exactly the kind of priest you’d want to go to for advice. But the first father I thought of for this list was Captain Snegiryov, Ilyusha’s father. Possibly the most heartrending paternal moment in the sum total of world literature involves Captain Snegiryov in Book Ten. In a way, it’s so devastating that it comes full circle to being hopeful because you figure, if human beings are capable of such profound love, then how bad can we be?

Nikolai Petrovich Kirsanov in “Fathers and Sons” by Ivan Turgenev

This short but densely packed and beautiful novel features one of my favorite literary dads, Nikolai Petrovich Kirsanov. Nikolai is the landowning father of Arkady, one of the two figurative “sons” in the title, which refers to Russia’s old and emerging ways of life. The brilliance of the novel is that Turgenev renders both old and new fully, without seeming to have an agenda other than to understand and express two ways of life as they come to heads. The result is that we see the humanity—the frailties and the flaws—of all characters, including the kind, devoted father, Nikolai.

Atticus Finch in “To Kill A Mockingbird” by Harper Lee

Atticus also tops my list of favorite dads in literature. Actually, he's one of my favorite literary characters of all time, now that I think about it. He is courageous and principled, loves and respects his children, and is the moral heart of his community.

Colbert's young-adult novel is about a 17-year ballet dancer, Theo, who is hiding a dangerous secret about her past that could impact her future. This gripping story has quite a few shocking reveals you might not see coming because it's told by an unreliable narrator. Mr. Cartwright is Theo's loving and supportive dad, who stands strongly at his daughter during her darkest moments.

Mr. Win in “The Art of Hearing Heartbeats” by Jan-Philipp Sendker

One morning, Julia wakes up to discover that her father has vanished. The successful New York City lawyeris last known to have boarded a plane to Burma, and Julia decides to try to find him. Once there, she is approached by a man who promises to tell Julia her father’s story, and a portrait emerges of a man Julia struggles to square with the man she knew. Besides being beautifully-written and poignant, this novel might also invite us think about the full lives our fathers lived before we came into, and changed the fabric of, their lives.

Brooks won the Pulitzer Prize for this novel about the absent father, a chaplain in the Union army during the Civil War, from Louisa May Alcott’s “Little Women.” I haven’t read it yet, so I can’t personally speak to the portrait of a father it presents. But it strikes me as a fitting choice for a list about literary dads since Brooks devotes her formidable imaginative and literary skills to bringing this character fully to life in a book all his own.

Mr. Bennett from “Pride and Prejudice” by Jane Austen

Of course I have to mention this novel, and not just because my dad recommended it to me, thinking (correctly) that 16 year old me would love it. Who can forget Mr. Bennett? Elizabeth’s dad was full of sarcastic, entertaining wit and clearly adored his clever daughter. But was he a good dad? On the one hand, he kind of tormented his wife (or maybe she tormented herself…and everyone around her) and sometimes showed not enough compassion or interest in ALL his girls. On the other hand, he did seem to come through when it was absolutely necessary.

What do you think? What literary dads do you find most memorable?

At the risk of stating the obvious, this is NOT a photo of my dad and me, though my dad is equally distinguished looking and partial to wearing hats. Photo credit: Powerhouse Museum Collection / Foter.com