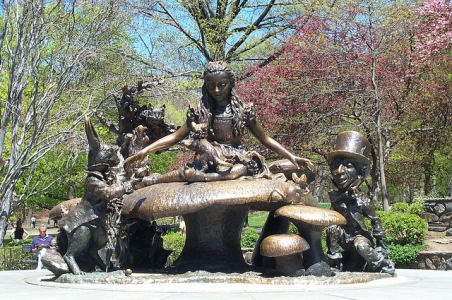 Students often make the argument that a favorite popular author is writing literature. Sometimes I agree, sometimes I demur. The distinction is often difficult to make, especially when a piece of writing is compellingly entertaining. It is as I try to explain my definition of literature that I often think of this exchange from Shrek. Literature is like onions, I want to say.

It was as I undertook the challenge of reading Lewis Carroll's "Alice in Wonderland" for the Gilmore Girls reading challenge that I thought of this again, mainly because most of us know this book through the lens of our layered experiences of the text. It is a book that has endured as a classic for 150 years, and this longevity is not only a testament to its stature, but also adds to the task of reading it. Before telling you about my rereading of the book, I think we need to peel away some of the layers:

Layer 1 – Personality and circumstance - our own complicated reading experience which includes our own reactions to Alice, the time and place in our own lifetime when we first experienced the book; the complicated chemistry of what led us to the story and what we distilled from it afterwards. It is unique to you and your reading of the novel. For me an experience of Alice is always complicated by the statute in Central Park, which was always used as a climbing structure by kids. It was the only statue I knew that you were encouraged to climb on, and it was always a bit creepy. Personally, I preferred hiding underneath. Perhaps that says it all.

Layer 2 – Media - cartoons, movies, and stage plays, beginning perhaps with the musical animated Disney version, released in 1951. Other film versions appeared beginning in 1903, and as recently as one starring Johnny Depp (2010). Part of the problem in thinking about any text with so many theatrical versions is that the visual and auditory image is what often lingers in our minds. Think, for example, of your image of the Cheshire Cat, which is probably derived from the Disney movie, rather than the text or the original John Tenniel illustrations.

Layer 3- Biography - the stories about the author, Charles Lutwidge Dodgson, who wrote under the pseudonym Lewis Carroll, an Oxford mathematician, Anglican deacon, and photographer. His many photographs of young girls lend a creepy edge to the tale of the origins of "Alice" in a story told to young Alice Liddell on a summer afternoon. It is compounded by the selective destruction of his journals and many of his original photographs. A life-long bachelor, Dodgson was not known as a particularly dynamic teacher, and much has been made of his lack of a visible heterosexual connection. Yet various biographers have made the argument that our modern focus on sexuality is perhaps an oversimplification of a complicated life.

Layer 4- Text - Carroll actually wrote two Alice adventures: Alice’s Adventures in Wonderland and Through the Looking Glass, though we as readers often conflate the two. And then there is the extent of our enjoyment of the word play in the original, and our understanding of the myriad cultural references in the text to events and culture of Carroll’s time. One popular edition of the text is "The Annotated Alice," which features extensive marginalia explaining the many parodies in the original. “How Doth the Crocodile,” the nonsense poem in chapter two for example is thought to be a parody of Issac Watt’s poem “Against Idleness and Mischief.”

But what remains when we think beyond these filters and return to the text? "Alice in Wonderland" is a truly bizarre tale, filled with the logic of dreams and the sharp sarcasm of a bored narrator. Alice herself is frustratingly simple-minded, the kind of heroine who you want to shake. Yet, at the same time, she was the hero of her tale; a young girl who was intrigued by the call of adventure and ran off to satisfy her curiosity, standing up to various formidable villains along the way. It is a novel that is worth rereading, but only if you are willing to look at it again with fresh eyes.

When you have finished rereading though, take a moment to recomplicate your encounter with the book by visiting the Morgan Library where the original manuscript of Alice will be on display beginning June 26 in celebration of the 150th anniversary of its publication. In addition to the manuscript, other related material, including some of Carroll’s correspondence will also be on exhibit until October. Of course all of this adds another layer to thinking about the text. But then literature is like onions. Or was that English teachers?