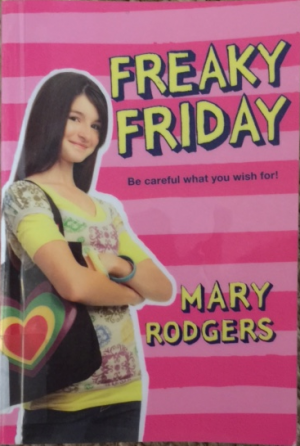 This also happens to be the plot of Mary Rodgers’ 1972 young adult novel “Freaky Friday,” in which a mother and daughter switch bodies for a day. Given my childhood preoccupation with trading lives, you’d think I would have discovered “Freaky Friday” as a kid, but somehow, it slipped by me. The first I heard of it was when the 2003 adaptation came out starring Jamie Lee Curtis and Lindsay Lohan as the body-swapping mother and daughter.

Seeing the title on the Gilmore Girls reading list gave me an excuse to finally read this book, though I have to admit some surprise that it’s on the list at all. “Freaky Friday” is referenced in three (that I know of) Gilmore Girls episodes,* but the references are to the film adaptation(s), not the book. Three versions were made, in 1976, 1995, and 2003, and each deviates markedly from the book, some more dramatically than others.

Rodgers’ novel is narrated by Annabel, the teenager who wakes up one morning in her mother’s body. Though she doesn’t know for sure at the story’s outset, she suspects that her mother, Ellen, engineered the body switch to teach her sullen, know-it-all daughter a lesson. The story follows Annabel exclusively, as she narrates the day’s (mis)adventures trying, and failing, to keep up with her mom’s schedule. Later, we learn that Ellen did indeed make the swap happen, and she spent her day as Annabel skipping school to get a makeover—shopping, getting a haircut, and having her braces removed.

What I found most interesting about reading this novel is how dated it feels. Part of this is simply due to language, i.e. the use of words like swell, dame, and square, but it's also because of the narrative. While Annabel proudly proclaims herself in favor of “Women’s Lib,” her teenaged neighbor Boris is teased for enjoying cooking and for babysitting, because these are considered feminine. Ellen spends her day as Annabel getting her a makeover, which is deemed a success because she’s transformed into “the hot chick,” and her secret crush Boris, who was previously repulsed by her, is now smitten. It's not that these attitudes and outcomes have been eradicated from contemporary books, but maybe they seem less glaring, or maybe it's that we're talking about what's harmful about the messages these attitudes send.

In the 2003 movie with Jamie Lee Curtis and Lindsay Lohan, equal attention is given to how the mother and daughter struggle to live each other’s lives. The book is less egalitarian in this. Annabel falls apart trying to do her mom’s work and finally collapses in her bed begging to switch back. Meanwhile, Ellen clearly improves Annabel’s life doing things she would never have done for herself. Ellen isn’t perfect: She hired a prejudiced housekeeper and has a two-pack-a-day smoking habit. To her credit, Annabel fires the housekeeper for her despicable attitude and breaks Ellen of her habit by not smoking while inhabiting her mother’s body. But overall, this is a “mother knows best” scenario. Annabel realizes the error of her ways thanks to her mother’s decision to swap bodies, and her life becomes better for it. I just wish it hadn’t been because Annabel is transformed into “the pretty girl.”

Still, I’m glad I read this book. It made me think about the relationships among language, culture, and story. It inspired me to think more about how the words we use can become barriers to connecting with characters and their story. And it invited me to wonder about how language and story in contemporary books will reveal our culture 40 years on, sometimes in ways we may wish it didn’t.