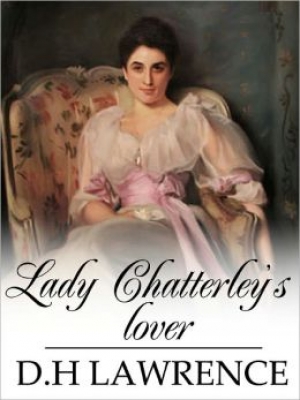 When Books, Ink contributing editor Jessica Collins suggested we do the Gilmore Girl reading challenge, my first response was, “Yay! Reading 339 books sounds like the best time ever!” There was, though, at least one title that I was a little less than enthused about: “Lady Chatterly’s Lover” by D. H. Lawrence.

As a general rule, my tastes skew Victorian, and I dislike explicitness, not only with s-e-x but also with violence. I don’t read horror novels for this reason (note: Stephen King is also on the Gilmore Girls reading list). But it seems the universe was asking me to step outside my comfort zone: Shortly after we embarked on this reading challenge, I was invited by a book group to lead a discussion of “Lady Chatterly’s Lover.”

The novel tells the story of Lady Constance Chatterly (usually referred to as “Connie” in the book) and her aristocratic husband Clifford, who was paralyzed from the waist down during World War I. After the war, the couple settles into a staid life on his manor, situated near the coalmines that Clifford owns. He focuses on writing and intellectual interests and encourages Connie to pursue physical relationships with other men, as long as they don’t interfere with Clifford and Connie’s marriage. In the beginning, Connie connects with Clifford on an intellectual level, supporting him with his writing and hosting friends to discuss ideas. But gradually, she comes to feel isolated from and emotionally neglected by Clifford. Driven by a desire to connect with someone both physically and emotionally, she is drawn to and has affair with the manor’s gamekeeper, Oliver Mellors.

In his time, Lawrence suffered persecution and censorship for writing this novel. It was not published in unexpurgated form until 1960 (two decades after the author’s death), and only after an obscenity trial, in which experts (including E. M. Forster) were called as witnesses. But though the language can often be coarse and vulgar, it’s not a novel about sex. Through Connie’s struggle, the novel mediates on dichotomies still relevant in our time: Nature vs. mechanization, emotion vs. intellect, body vs. mind. Lawrence’s prose can be quite beautiful, when he’s not talking about Connie’s bowels “fainting” (and making copious use of four letter words). In a sense, the juxtaposition of crudeness and beauty at the language level echoes the novel’s themes of struggling to balance seemingly opposing qualities.

Several times while reading the novel, I found myself laughing at his histrionic descriptions of male and female attitudes about sexual situations. But these descriptions also made me uncomfortable because I suspect Lawrence wasn’t intending to be funny but rather sarcastic, in a way that could be interpreted as misogynistic. That said, I found both Connie and Oliver to be sympathetic characters who were trying to find meaning and connection despite societal constraints that conspired to prevent them.

I’m fairly certain that I would not have made time for this novel had it not been for the challenge and the book group. To quote Emily Gilmore, “It’s not my taste, but I respect the attempt.”