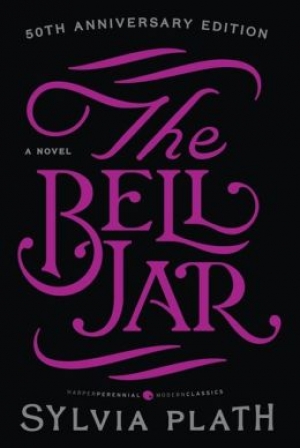 My Gilmore Girls Challenge choice is “The Bell Jar” by Sylvia Plath, her first and only novel published in 1963 one month before her suicide. Plath chose to publish in the UK under the pseudonym Victoria Lucas because the story was based so closely on her life that she thought it would be hurtful to family and friends had they known about it. Not until 1967 was it published under her own name, and not until 1971 was the book published in the United States.

“The Bell Jar” introduces us to the intelligent and gifted Esther Greenwood, a recent college graduate from Massachusetts who has won an internship at a fashion magazine in New York. I love stories set in New York with all its glamour and grittiness, with all the opportunities and hiding places (depending on what you are seeking!). Since Esther was young and impressionable, it was interesting to view the world through her eyes, in the 1950s, as it related to gender roles, aspirations, sexuality—and mostly how she felt about the expected path of women with both its pitfalls and promises. We see a young woman coming to terms with who she is, which was not at all easy or straightforward or even definitive. In fact, this identity journey of Esther’s—where she fit in, or more painfully, how she perceived that she didn’t—is what begins her torture. Her leanings are feminist, but because it’s the 1950s, these ideals were not mainstream. She struggles with how women are meant to think and behave. At times Esther wants to get married and have a “pack of children.” At other times, she tells her psychiatrist, “What I hate is the thought of being under a man’s thumb.” She is crippled by the paradox of her own thoughts and desires:

I saw myself sitting in the crotch of this fig tree, starving to death, just because I couldn't make up my mind which of the figs I would choose. I wanted each and every one of them, but choosing one meant losing all the rest, and, as I sat there, unable to decide, the figs began to wrinkle and go black, and, one by one, they plopped to the ground at my feet.”

For most of her young life, Esther defines herself by her scholastic achievements, and so when the summer internship in New York concludes, and she returns home to suburban Boston to find out she has not been accepted into a writing program at Harvard, she is lost. Even during her time in New York, as exciting and fortunate as it is for Esther, we never feel she is excited about the opportunity, nor does she use it as a springboard to a certain path. Instead, along with the subsequent Harvard rejection, it plants her more steadily into a depressive state that will occupy the next months, and years, of her life.

It struck me how Esther rarely, if at all, talked about this tug-of-war within her, and I wonder if Plath herself had ever done so with family or friends. Maybe she would have discovered like-minded women and a kinship and support that would have prevented her decline into darkness. This made me think of teens even today, who feel they are not understood and are often at risk. Not much has changed there since the 1950s.

“The Bell Jar” is a fascinating look at how depression is treated in the 1950s. Or perhaps, mistreated. Not until Esther meets Dr. Nolan, a female psychiatrist, does she feel safe and optimistic about her treatment and future. In the lowest, darkest hours of Esther’s life, the author never imbues this character with self-pity. There are even humorous moments. I always felt as though Esther experienced things from outside herself looking in, removed, without emotion. As candid and open as this story was, it also felt remote at the same time.

It was difficult for me to separate Esther Greenwood from Sylvia Plath. I thought about how mavericks are not lauded until their ideas are accepted or proven valid by the masses and how this often happens after they’ve died. During the lifetime of a non-conformist, they’re often considered to be freaks or mentally unstable. Just because what they believe is out of the realm of thinking for the rest of us.

Eva Lesko Natiello is the author of the psychological suspense thriller “The Memory Box.” Her essays have appeared on nj.com and Huffington Post.