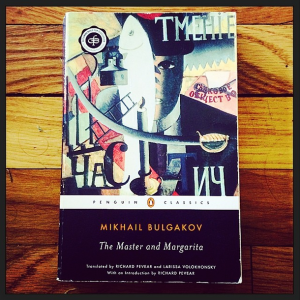 A few years back, I went through a phase of reading only Russian literature in translation, I suppose because I perceived it as a cavernous gap in my literary education. And I aimed to fill it by reading as many of the major books as I could. (Nikolai Gogol’s “Dead Souls,” also on the Gilmore Girls reading list, was my Waterloo, so I’ll have to pick it up for a future challenge.)

It was during this time that I first discovered “The Master and Margarita” by Mikhail Bulgakov, and it remains one of my all-time favorite novels. Interestingly enough, it also inspired my favorite Rolling Stones song, “Sympathy With the Devil.” And here’s one more oddly kismetic detail: Bulgakov and I share the same birthday, May 15.

He’s a fascinating figure, who had a difficult and short life (he was 48-years old when he died in 1940). One of seven children, he was born in 1891 in Kiev, then part of the Russian Empire. Though he enjoyed literature, he trained to become a doctor, volunteered with the Red Cross during World War I, and served at the front. This was, famously, a chaotic time, with the Russian Empire collapsing and civil war breaking out. Though his family was serving in the White Army (which fought on behalf of the Tsar), Bulgakov was in the Ukrainian People’s Army. After the Soviets prevailed, most of his relatives emigrated and he never saw them again.

After the wars ended, Bulgakov left his medical career behind to focus on becoming a writer … just in time for Stalin’s brutal reign. The two had a somewhat bizarre relationship. Stalin banned Bulgakov’s work, and he also enjoyed it. And when Bulgakov requested, via personal letter, permission to emigrate since he could not find work, Stalin found him work. So you could say their relationship status was a bit … complicated.

Bulgakov began writing “The Master and Margarita” in 1928 and continued working on it until his death in 1940, having taken time off to burn the manuscript in despair over the prospects for writers in the Soviet Union. It’s not hard to see why the satiric masterpiece was frowned upon by Soviet thought-makers: the novel pokes less-than-veiled (and laugh out loud) fun at bureaucracy and Moscow’s new elite (which seems a lot like its old elite.) It also explores the interrelation between good and evil, borrowing themes from Faust.

The book alternates between two settings—contemporary Moscow (i.e. the 1930s when Bulgakov was writing) and Jerusalem during the time of Pontius Pilate. The story begins with the devil arriving in Moscow disguised as a foreign professor named Woland. His retinue includes Behemoth (a large black cat who can walk on two legs and speak), Azazello (a hitman who sports fangs and has a wandering eye), Abadonna (a ghostly pale figure), and Hella (a flame-haired vampire). Most of the novel follows them as they wreak havoc on the city and its residents, exposing the new ruling class’ vanity and greed, engaging in philosophical debates, and playing pranks galore.

Among the objects of those pranks are Berlioz, the head of a literary group, its cumbersome bureaucracy, and Ivan Ponyrev, a poet who lands himself in an insane asylum. There, he meets the Master, a disillusioned and embittered author who burned his manuscript (a novel about the meeting between Pontius Pilate and Yeshua Ha-Notsri). Also figuring in the story is Margarita, the master’s steadfast lover who plays a redemptive role.

The novel has been translated into English at least six times, and when it comes to deciding which to read, well, debates can become animated. The two I have read are the Penguin Classic edition by Richard Pevear and Larissa Volohkonsky and Mirra Ginsburg’s 1967 translation. Both were excellent, though Ginsburg earned a slight edge with me because of the way she captures the humor. One thing to remember about her version, though: It’s of the censored Soviet edition of Bulgakov’s novel.

I so wanted to find out in what episode the novel or author was referenced, but I couldn’t get my hands on that intelligence. Does anyone know?