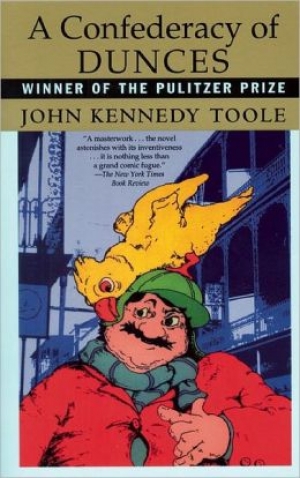 John Kennedy Toole’s "A Confederacy of Dunces" was written in the 1960s but was not published until 1981, well after the author committed suicide in 1969 at the age of 31. Toole tried unsuccessfully to get his beloved work published and before his untimely death had submitted several rounds of rewrites to Robert Gottlieb of Simon & Schuster. During his correspondence with Toole, Gottlieb wrote, “It’s a brilliant exercise in invention, but … it isn’t really about anything. And that’s something no one can do anything about.”

Admittedly, this book has been on my shelf for years, and I have tried to get into it a few times without success. This year, however, I was determined to read it, and the Gilmore Girls Reading Challenge provided the perfect catalyst. It took me a little time to become fully engaged in this picaresque novel, but after about 50 pages or so, I was hooked. Set in 1960s New Orleans, Toole’s story is centered around the misfit adventures of Ignatius J. Reilly, a 30 year old, hypochondriacal, delusional man-child who lives with his mother and thinks that he is smarter than everyone he meets, despite having achieved exactly nothing over the course of his life.

Ignatius is surrounded by a large and varied cast of characters, each one more ridiculous than the last: his mother, a functioning alcoholic who finds a new group of friends and begins a life that doesn’t revolve around her son;  Myrna Minkoff, Ignatius’ former flame who lives in New York; and Jones, an underpaid hired hand at a seedy bar, perhaps the only likeable character of the whole bunch, and my personal favorite.

"A Confederacy of Dunces" is a riotous tale that provides more than a handful of laugh-out-loud moments. It is highly entertaining and extremely readable, despite having almost no likeable characters. Gottlieb’s comment above gave me pause when I read it – is this book about anything? I leave that for you to decide, reader, and when you’ve finished it, to also answer: Does it matter?