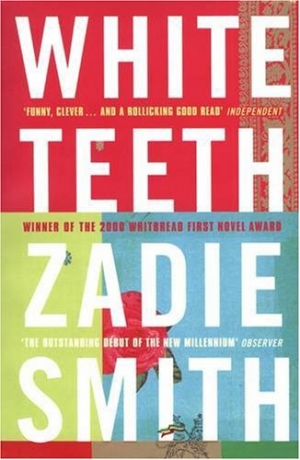 In Smith’s award-winning debut novel, conflicting beliefs intersect and collide in multiethnic North London during the latter half of the 20th century.

The story follows two families, the Joneses and the Iqbals, through the last three decades of the 20th century. Working class Archie Jones, who served at the tail end of World War II, folds paper for a living. A well meaning if bumbling peacemaker by nature, Archie always carries a coin with him wherever he goes, just in case he needs to make a decision. His 28-years younger wife Clara is the daughter of Jamaican immigrants Hortense (a fervent Seventh Day Adventist) and Darcus (a devout couch potato). Archie’s best friend is Samal Iqbal, a Bengali Muslim who served alongside Archie during the war. A waiter who longs from more from his life, Samal is fixated on his past, in particular on his great grandfather Mangal Pande, hailed as either freedom fighter or traitor, depending on whom you ask. His arranged marriage to the much younger Alsana produces twin boys, Magid and Millat, born around the same time as Irie.

Shifting perspectives across the decades, the narrative delves into the characters’ struggles and temptations—including as immigrants, as Muslims, as non-white citizens of England. In their interlocked stories, intentions and ideals consistently brush up against the messiness of real life: A suicide attempt is foiled by a bad choice of parking spot; a traditional(ish) Muslim wife unwittingly sews S&M costumes as a work-from-home seamstress; a group of righteous religious protesters are stymied by a subway line that is shut down for the day. Ideological battlegrounds coexist with friendship: While Samad bemoans the temptations and dangers of Western life, his best friend is a white Anglican Englishman. Hortense disowns her daughter Clara for marrying Archie, a white man, but since Hortense rather likes this particular white man, she keeps in touch him yet refuses to speak to her daughter.

It is a marvel of a novel, funny and sad and sprawling, that invites readers to think hard, to empathize with the vastness of human experience, and to be suspicious of drawing any bold, clear lines about who is a friend and who is an enemy.