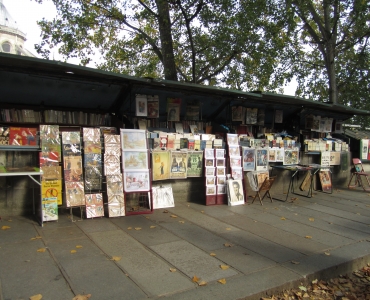 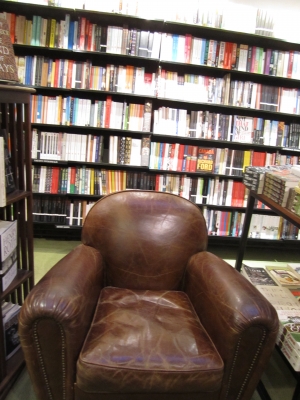 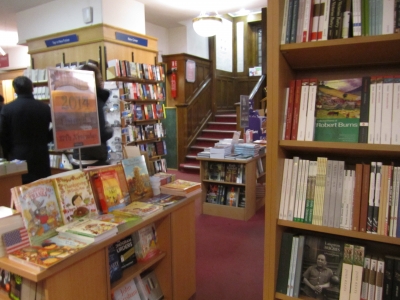 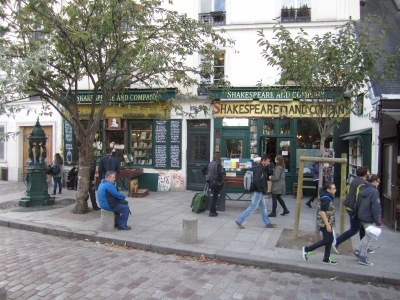 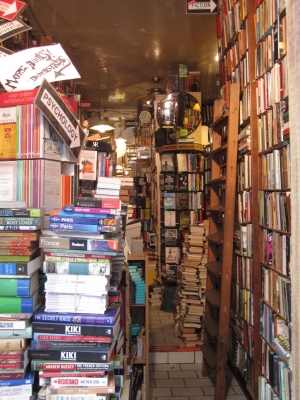 Did you hear the story about David Willis? In late October, the American tourist got accidentally locked in a closing Waterstones bookstore in London and tweeted the company so he could get out. Willis didn’t seem too thrilled with the situation, but he made countless bibliophiles insanely jealous. Cowing to pressure, Waterstones held a contest that allowed about 20 lucky winners to spend the night in one of their stores – and it seems to have gone wonderfully.

The contest is over, but it’s inspired many of us to keep dreaming (more than ever) of being locked in a bookstore overnight. The longing may be even worse if you live in a city chock full of these delightful places, like I do here in Paris. The City of Light has been known for its bookshops pretty much ever since one of Europe’s first printing presses took up its quarters at the Sorbonne, in 1470. And even before then, I’m sure you could probably find people hawking scrolls and manuscripts in notable places.

Today, Paris is full of charming bookstores – but would any be good places to be stuck for the night? I decided to give this some serious thought. Since there are over 500 bookstores here, I narrowed down the options by choosing ones that either only sell English-language books or have a huge selection of books in English. After all, not all of our readers may speak French, and while the smell and sight would certainly be heavenly, what’s the point of being stuck in a bookstore if you can’t read the books around you, as well? So, if you’re hoping to miraculously get stuck in one someday, here are five Parisian bookstores that could make for magical overnight stays:

Right Bank: from the Pont Marie do the Quai du Louvre

Left Bank: From the Quai de la Tournelle to the Quai Voltaire

Hours: It seems like each bouquiniste chooses his or her own!

Okay, so this isn’t a store. But strolling along the banks of the Seine, browsing the contents of these small, box-like book stalls is the quintessential Parisian bibliophile experience. So how to spend the night at a stall? I don’t think anyone could fit comfortably into one of those boxes when it’s closed; you’d either have to take a page from the bouquinistes themselves, who often hunker down beside their stalls in a heavy coat and foldable chair, or do it Alfred Jarry-style and sleep under a nearby bridge.

Pros: The view and location. There are few sights more exquisite than the banks of the Seine. Plus, you’re in the center of the city, so it’s easy to take a stroll and discover many other alluring places – including other bookstores.

Cons: No amenities. And most of the year, it’s pretty cold at night in Paris. And, magical as the city is, sad to say, it does smell rather…uriney…under those bridges…. Also, the bouquinistes seem like a pretty ornery group of people. If one caught you camped out in front of their stall the next day, I’m not sure they’d be very happy.

If you’re a traveler who craves luxury in all things, Galignani has it all: from the pedigree (founded in 1801, it’s considered not only the first English bookstore in Paris, but on the entire European continent, excuse you!) to its very posh décor. When you walk in, you’ll smell books and a bit of high-end floor polish (the hardwood is kept gleaming at all times). The books are arranged on high shelves and on tables in a spread-out manner, much as an elegant lady would unfold her fan. But don’t let appearances fool you: the place, as we lower-class folk might say, also has street cred. It’s especially known for its excellent selection of art books.

Pros: Swanky surroundings, huge selection, and a comfy armchair in the back that would be an ideal place to read yourself to sleep. And when you woke up and headed out, the luxury feeling wouldn’t disappear – you’re in one of the most beautiful parts of the city, just across from the famous, gorgeous Tuileries Gardens.

Cons: If you’re on a very small budget, you’re not likely to come out of there with many books.  And, if you’re looking for cozy accommodations, this isn’t likely the place for you.

Established in 1903, the Paris branch of this UK bookstore chain has tons of English books, as well as foods, DVD’s, knickknacks, and more. W.H. Smith is a go-to for the expat community…well, at least those with some money, because books here aren’t cheap. Still, the ambiance is pleasant, even downright homey, and browsing is totally fine.

Pros: The worn carpet and drab-looking décor that’s only livened up by all the alluring books might surprise you, especially if you’ve just come from the impeccably polished Galignani down the street. But it’s so cozy and comfortable that, well, one more spot on that rug probably would go unnoticed. Basically, if you’re looking for a (very large) book-filled den with reminders of home (including groceries and displays for Anglo-Saxon holidays) W.H. Smith is definitely where you need to spend the night.

Cons: No luxury ambiance here, despite the high prices, so if that’s the kind of bookstore overnight you want, you’d best keep moving. Other than that, well, I have to confess, I come to W.H. Smith very rarely, since I’m one of those poor expats who buys her books on a budget, or uses the libraries instead, but every time I do, I leave feeling warm and happy.

This one is actually quite appropriate for a list about bookstore overnights! Founded in 1951 (its name is an homage to Sylvia Beach’s eponymous, legendary shop), Shakespeare and Company is famous today not only for its selection of books and its numerous events, but also for the fact that penniless, book-loving travelers actually can spend the night there! Of course, space is limited, and there are some rules: if you can get a bed (these are found among the books and closed up or used as benches during the store’s opening hours), you have to be willing to work in the store, read a book a day, and write a short autobiography.

Pros: GREAT location. The store itself is housed in a tumbledown medieval building, and the view outside its cramped, book-filled corridors is possibly even more breathtaking -- right across the Seine, towering above you you’ll see Notre-Dame herself. Also, if you don’t like to sleep alone, this is the place for you, since you’d have other overnighters in the place, as well as the store’s cat and dog.

Cons: Although most Parisian shops of any kind don’t have bathrooms for customers, Shakespeare & Co. used to only have a Turkish toilet (i.e. ceramic-lined hole in the ground) for the people staying there. Today, the situation might have improved some, but you’ll still have to share with several other people. In fact, if you’re not a people person, this might not be such a great place for you: Sharing is the general rule, from your bed being gawked at or even sat on by customers seven days a week, for almost 12 hours straight, to having to deal with there only being one key for guests.

Just a few twisty medieval streets from Shakespeare and Company is this utterly charming hole in the wall. The Abbey Bookshop is one of those little-known pleasures Paris bibliophiles in the know go mad over – and rightly so. Just look at the narrow, winding aisles packed with tomes. The view from the doorway draws you in, and at some point, you feel like you might get lost forever among the books…not that that would be a bad thing.

Pros: Great location. Tucked away in an old Latin Quarter street, the bookshop and its neighborhood exude charm. Plus, there’s the practical side: the surrounding shops offer everything from food, to cute hats. There’s also the beautiful and often overlooked Flamboyant Gothic church of Saint-Séverin a few short paces away. And the bookstore itself seems perfect for an overnight: It’s so easy to imagine burrowing yourself in here and slipping away to a book-filled dreamland.

Cons: A bit cramped, so if you’re the kind of person who likes to spread out when you sleep, you should probably head elsewhere.

When you come to Paris, why not linger in these bookstores, or in the countless other ones you’ll likely come across in your wanderings? Who knows – maybe, like, David Willis, you’ll go unnoticed when they close. But even if that doesn’t happen, you’ll be in a place where bookstores of all sorts await you – and that’s not just the stuff of dreams.

About the author: Alysa Salzberg is a writer and trip-planner. She lives in Paris with a Frenchman who dresses up like a Napoleonic soldier, a cat who acts like a dog, and a baby who takes off and starts chewing his socks faster than you can imagine. Besides them, her loves include books, travel, and cookies.