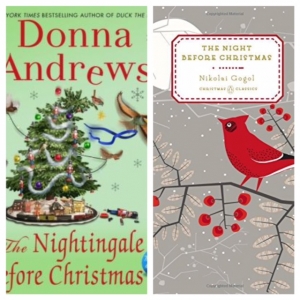 Last week, I discovered so many holiday-themed books I want to read, more than enough to last me through the month of December. A head start clearly seemed to be in order, so I dove in straightaway. And yes, I’m aware that Thanksgiving is still over a week away.

“The Nightingale Before Christmas” by Donna Andrews

When I was in middle school, I enjoyed reading Agatha Christie novels. It was fun and exciting to try piecing together the clues to solve the murder, as if I were in a battle of wits and nerve with the author. As an adult, though I do enjoy thrillers, I’ve not read many murder mysteries. But after reading several enthusiastic reviews for Andrews’ holiday mystery, I decided to give this one a shot.

The story is part of Andrews’ Meg Langslow series and revolves around a Christmas show house. Decorators are asked to donate their time to each decorate a room in the holiday house, with a panel of judges picking a winner. The house will open to the public on Christmas Eve for tours, and the proceeds from ticket sales will be divided between the town’s historical society and a charity of the designer’s choice.

For Meg, who is coordinating the effort, the project has become a huge headache. One designer, Clay, has been nothing but a nuisance, a college reporter is sniffing around, boxes of supplies ordered by several of the designers have gone missing, and the designers are perpetually in diva mode. But the real trouble hits a few days before the house is due to open: Clay is found dead. With a killer is on the loose and possibly working in the house, Meg can’t help but poke around for clues as to who killed Clay and why.

For someone who does not normally gravitate to this genre, I enjoyed reading this book. Neither the murderer nor the victim were particularly likeable, which didn’t make it okay that one killed and one died, but it did provide emotional distance from the characters. Andrews also does not linger on the kind of gory details that are likely to inspire nightmares due to my overactive imagination. The sense of community and camaraderie among Meg and the cast of characters (in more ways than one) was lovely and cheering. Plus the writing was witty, with the plot providing just enough clues to make me think and question myself and think again.

I noticed that I read this book quite differently than I do other genres. Where I tend, while reading literary fiction, to let the story wash over me and gradually come together, reading “The Nightingale,” I was noting pointed details, bookmarking pages, and trying to eliminate suspects. This process was so engaging that, without intending to, I ended up reading it almost straight through from beginning to end. Andrews has sold me on reading well-crafted cozy murder mysteries, and I just might have to pick up the rest of her Meg Langslow novels.

“The Night Before Christmas” by Nikolai Gogol

Gogol is brilliant at poking fun at human foibles in a way that is paradoxically both biting and affectionate. In this novella, the devil is running amok on Christmas Eve intent on revenge against Vakula, a blacksmith who also paints icons of the devil being defeated. Meanwhile, Vakula is trying to woo the flighty Oksana, whose father is carrying a torch for Solokha, along with several other men in the village, including the deacon, who all converge on her house on Christmas Eve.

I laughed out loud often reading this story, and the ending is just about perfect.