What Are Your Holiday Reading Traditions? 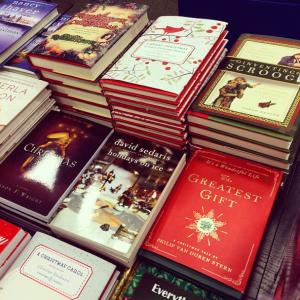 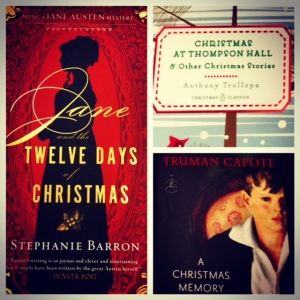 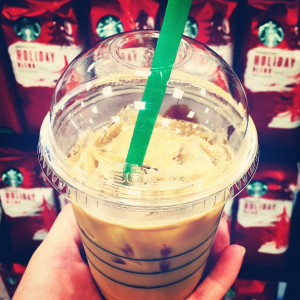 Earlier this week, I enjoyed my first gingerbread latte of the season while strolling through the holiday book display at Barnes & Noble. I have a special place in my heart for gingerbread lattes. They were what first got me hooked on coffee when I returned to graduate school after my son was born and needed a boost to get me through the “sleep is for suckers” stage of his infancy.

One especially sleep-deprived day, I staggered into a Starbucks near Astor Place in Manhattan before class, gazed glassy-eyed up at the menu board, and thought, Gingerbread and coffee? How’s that going to work out? Quite nicely, thank you, as it turns out.

So what if it’s not even Thanksgiving yet, and we have barely had time to grow weary of pumpkin spiced-everything (just barely)? If an extra month of gingerbread lattes is part and parcel with the “holiday season” coming earlier and earlier each year, I’m not complaining.

Besides, this gives me more time to make my holiday reading plans. In the past, I’ve enjoyed David Sedaris’ hilarious story collection “Holidays on Ice” and the clever and entertaining “The Autobiography of Santa Clause” by Jeff Guinn. Year after year, I have returned with pleasure to “A Christmas Carol” by Charles Dickens. But I wouldn’t mind adding a few new titles to my December reading list. It’ll be here before you know it (maybe sooner).

My stroll through Barnes & Noble yielded the following new and intriguing possibilities:

“Jane and the Twelve Days of Christmas” by Stephanie Barron. Circa 1814, Jane Austen is spending the holidays with friends. All seems merry and bright until a Yuletide reveler dies, and Jane races to discover whether it was an accident or murder. Happy Christmas!

“Christmas at Thompson Hall and Other Christmas Stories” by Anthony Trollope. Trollope doesn’t have the star quality of Dickens in popular circles, but he was an insightful and witty social satirist. So I was chuffed to discover this collection of his Christmas stories.

“A Christmas Memory” by Truman Capote. I remember reading this autobiographical story about the last Christmas shared between a little boy and his much older cousin in middle school but have not returned to it since. Folks near Greenwich or Westport can also see the stage adaptation presented by JIB Productions in December.

“The Night Before Christmas” by Nikolai Gogol. Gogol’s story is a far cry from the Clement C. Moore poem American children have grown up reading on Christmas Eve. Though, according to the forward in the Penguin edition, Gogol’s story is also read to children on Christmas Eve. His macabre and humorous story kicks off with the devil intent on exacting revenge on a blacksmith named Vakula, who creates icons of the devil being defeated.

“The Nutcracker” by E. T. A. Hoffman. Catching a performance of The Nutcracker ballet (lots of local options for this!) is one of my holiday traditions, so the original story by Hoffman would make a nice complement. Iconic Christmas trappings—nutcrackers, sugar plums, and mistletoe—are woven in the story of a little girl who receives a nutcracker from a mysterious uncle. The nutcracker comes to life, battles the Mouse King, and transports the girl to the Land of Dolls. Hoffman wrote it in 1816 for his children, nieces and nephews.

“The Nightingale Before Christmas” by Donna Andrews. I’ve been seeing this cozy mystery, lauded for its humor and plotting, everywhere over the last week or so. The drama revolves around a Christmas-themed decorator house, a designer who ends up dead, and Meg Langslow sleuthing to find the killer.

This should keep me busy in the month of December, though I’m still worried I’m missing something. What’s on your holiday reading list?