The Reading Life: What Makes a Book “Good” or “Bad”? 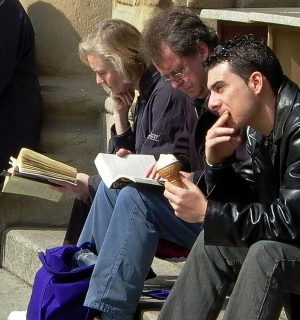 At the core of our experiences are contraries. We know hot because we know cold. We experience pleasure as contrasted with pain. We appreciate abundance because we have suffered its absence. It logically follows, then, that we can recognize great books by also having experienced bad ones.

This was one of the reasons I offered to read a bad book back in June when Jessica Collins shared her frustration with it.

I should note that determining whether a book is bad isn’t the same as deciding whether I liked it. Sometimes, I don’t like books that I recognize are beautifully written and/or thought provoking and/or skillfully executed.

So what makes a book "good" or “bad,” the kind of bad that makes me either not finish it or feel frustrated after I do?

These qualities can be both subjective/personal and not. I teach communications and believe that not understanding how we feel and being unable to express it productively when we do causes a great deal of human suffering. I’m drawn to books that help me articulate both. But I also believe great literature exhibits certain qualities that transcend our personal preoccupations.

Narrative voice. Readers can’t always trust the narrator. And we’re not always meant to; in a well-crafted book, an untrustworthy narrator can be compelling.

Take Sophie Kinsella’s “Shopaholic” as a fun example. It’s clear that the narrator cannot be trusted because we, the readers, are given evidence that contradicts what she says about herself and her experience. A large part of the book’s humor is grounded in that disconnect between what she believes about herself and what we know about her based on other evidence presented to us.

Language. In a good book, the author’s use of language is the vehicle through which readers access and identify with characters’ experiences.

In “Infinite Jest,” for example, David Foster Wallace uses sentence fragments, excess verbiage, and narrative disconnect to unsettle and confuse the reader, which brilliantly echoes, at the sentence level, the protagonist’s experience in the moment. It may be frustrating to read, but it’s intended to be so because it’s what enables us to identify with the protagonist’s experience.

For me to call a book “good,” this purposeful shaping of language is a “must have.” I’m preoccupied with improving my ability to communicate, and to do so requires understanding language’s infinite potential. I appreciate authors who show me that potential. On the other hand, a book overpopulated by cliché expressions tends to bore or frustrate me.

When authors find new ways to express universal experiences, my understanding of those experiences deepens, as does my ability to express them. Here is my favorite example I encountered this year, from Vladimir Nabakov's "Pnin": "His life was a constant war with insensate objects that fell apart, or attacked him, or refused to function, or viciously got themselves lost as soon as they entered his sphere of existence."

Now imagine if he had just referred to Pnin as "clumsy" and "absent-minded." Not quite the same effect, eh?

Ambiguity. When a novel is open-ended or a character’s decisions can be both justified and criticized, I call this purposeful ambiguity, meaning it mirrors a reality of life: it generally refuses to be as tidy and clear-cut as we may wish it were.

In Sophocles’s tragedy “Antigone,” Antigone cannot deny her brother a proper burial, and Creon cannot allow her to bury him. Competing roles and responsibilities compel each to act in ways that are irreconcilable with the other. In this extreme example, it is also tragic. I do not believe a book has to be tragic to to be good, but a good book acknowledges life’s gray areas, it’s moral, emotional, and spiritual struggles. Good books raise important questions and invite us to think through them.

A bad book is less ambiguity and more confusion. Storylines may disappear halfway or three-quarters through, never to be mentioned again, or be resolved in a way that feels too simplistic or that otherwise does not conform to reality, which leaves me feeling unsatisfied and frustrated.

For some readers, any type of hopeful or positive ending, the type typical of romantic comedies for example, is rejected as being “unrealistic” and/or “implausible.” I am not one of those readers. The work of living is, to me, the work of choosing meaning, resolution, and happiness. I especially appreciate authors who understand that we are always making choices and who show me what it looks like to choose meaning, resolution, and happiness even when it is most difficult. For examples, I recommend the Harry Potter series and “The Goldfinch” by Donna Tartt.

Emotional truth. It’s a delicious paradox that good books express universal human experiences by sinking deeply into individual characters’ inner lives. The deeper they go, the more likely they are to reach the core of what it means to be human.

This is why we can read literature written from a different time and place—Charles Dickens or Petrarchan sonnets or ancient plays—and shiver with recognition. This is how books help us understand experiences we have not had and people we have not been, thus enlarging our capacities for empathy. Even when the packaging is entirely unfamiliar (i.e. Dickens' Pip in "Great Expectations": an orphaned blacksmith’s apprentice in Victorian England receives an anonymous inheritance) the underlying emotional experiences are familiar (i.e. the thrill of reinvention erases old loyalties, or we don’t know how to value what we have until it is lost).

Books I’m likely to call “good” or “great” feature characters whose inner lives not only resonate but reveal the emotional truths that cause or alleviate suffering. Bad books, not so much.

Wholeness. In a good book, everything serves a purpose, and the end of the book seems self-evident, even if we didn’t predict it.

Consider the first Harry Potter novel. The narrative led us to suspect that Snape was trying to kill Harry, but at the end, when it’s revealed that it was actually Voldemort acting through Quirrell trying to kill Harry, we look back at all the clues we relied on and realize our sources were flawed. We read the clues from Harry, Ron, and Hermione’s points of view, and we got the facts wrong because they did. When the truth is revealed, it’s connected to previous evidence that we (and they) misread.

A good book can lead us along a false trail, but the ending has to come together in a way that is plausible and evidenced. A bad book may be random and disconnected, which leaves me feeling—you guessed it—dissatisfied and frustrated.

What makes a book “good” or “bad” for you? To what extent is it personal/subjective and not?