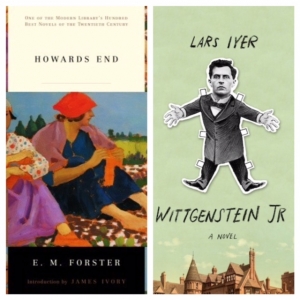 Among the books I kept company with this weekend were two I began reading last week, E. M. Forster’s “Howards End” and Lars Iyer’s “Wittgenstein Jr.”

I’d never read any of Forster’s books, though I’ve seen the film adaptation of “Howards End” (gasp!). So it was about time I experienced the book. “Wittgenstein Jr” is hot off the presses and takes place on a university campus, a setting that tends to catch my attention.

And here we go.

Three families circle around each other and finally collide in Forster’s classic portrait of English society at the turn of the 20th century.

At the head of the posh Wilcox family is Henry, a model of English restraint. Henry’s wife Ruth sees much but says little and is relieved to be unburdened by the right to vote. The couple has three children, Charles, Evie, and Paul, who shares a very brief romance with Helen Schlegel, a half-German, half-English orphan who lives with her older, spinster-ish sister Margaret and their younger brother Tibby, a student at Oxford. The Schlegels have independence and money enough to immerse themselves in cultural and other somewhat bohemian, at times provocative, interests. At the other end of the socio-economic scale is Leonard Bast, a clerk estranged from his family who the Schlegel sisters befriend, and his “unrespectable” wife Jacky. The fates of the three families intersect when Margaret and Helen pass on to Leonard Henry’s off-hand advice.

The novel was written in 1910, with the first World War still a few years into the future but social unrest, at least as concerns the place of women, already beginning to simmer. The characters and events offer a critique of tradition and English society that seems not at all subtle. But while Forster’s characters push against or attempt to fortify limitations imposed at a particular moment in history—a class system that reinforces itself, gender and socio-economic inequalities—the characters’ emotional experiences—frustration, hypocrisy, fear, love—resonate in any time period.

The novel’s vision of the future feels prophetic, a familiar experience when reading classic novels that so incisively capture the human condition. The minutiae changes, but human nature not so much. Forster’s seemingly prophetic brilliance is his ability to recognize the universal patterns playing out in the moment. It also doesn't hurt that he knows his way around a sentence.

Iyer’s lyrical novel unfolds like a prose poem, in fragments and scenes, compressed images and emotion, with rhythm and repetition that pull the reader through the novel. Its story concerns a group of Cambridge students on the cusp of entering the real world and their philosophy lecturer (whom they dub “Wittgenstein”) on the cusp of madness.

The first-person narrator is known as “Peters.” Hailing from the north of England, he seems to be something of an enigma to his classmates, who represent a cross-section of English society. Peters’ narrative alternates between classroom scenes—in which a frustrated Wittgenstein rails against Logic, the Cambridge “dons,” philosophy, and his students, who are both confused and intrigued by their increasingly unhinged lecturer—and scenes of college debauchery, the students drinking and drugging to excess as they playact scenes from philosophy (Socrates’ death, for example) and contemplate their uncertain futures.

Appropriate to the characters’ precarious existential states, the story’s grounding idea shifts, depending on where the reader is located in the narrative. It is at turns a novel about England, the university, youth, madness, philosophy, love, which, when summed up, becomes a coming-of-age novel.

What have you been reading?